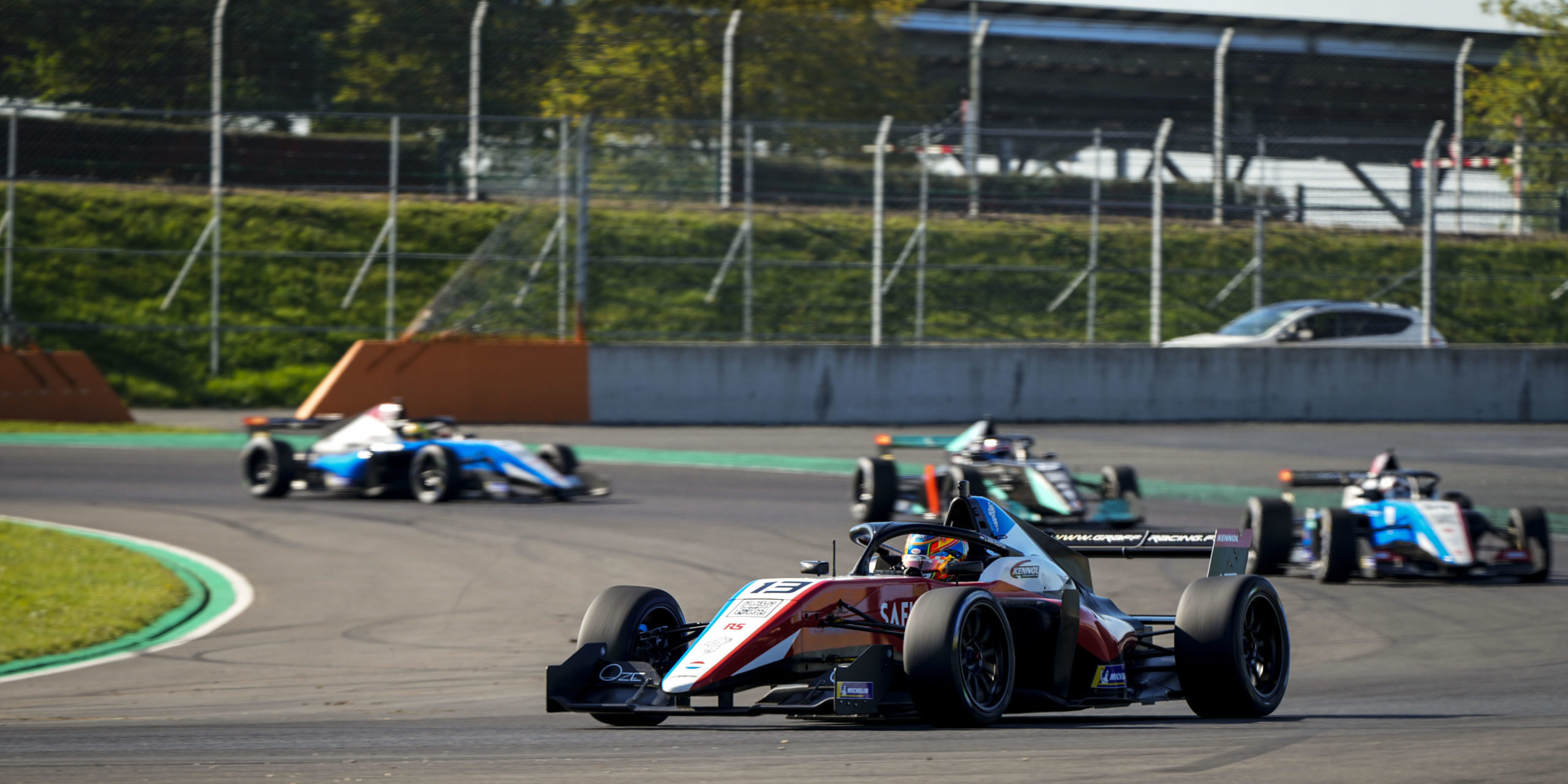 With no less than ten races, nine Sprint and one 4-hour Endurance, the non-stop activity on track animated this day placed under the sign of competition on the Circuit de Nevers Magny-Cours.

The Nivernais track, combined with the glorious weather and the magnificent grids on offer, including the Legends Cars, formed the perfect setting for this fifth event of the 2021 Ultimate Cup Series season. 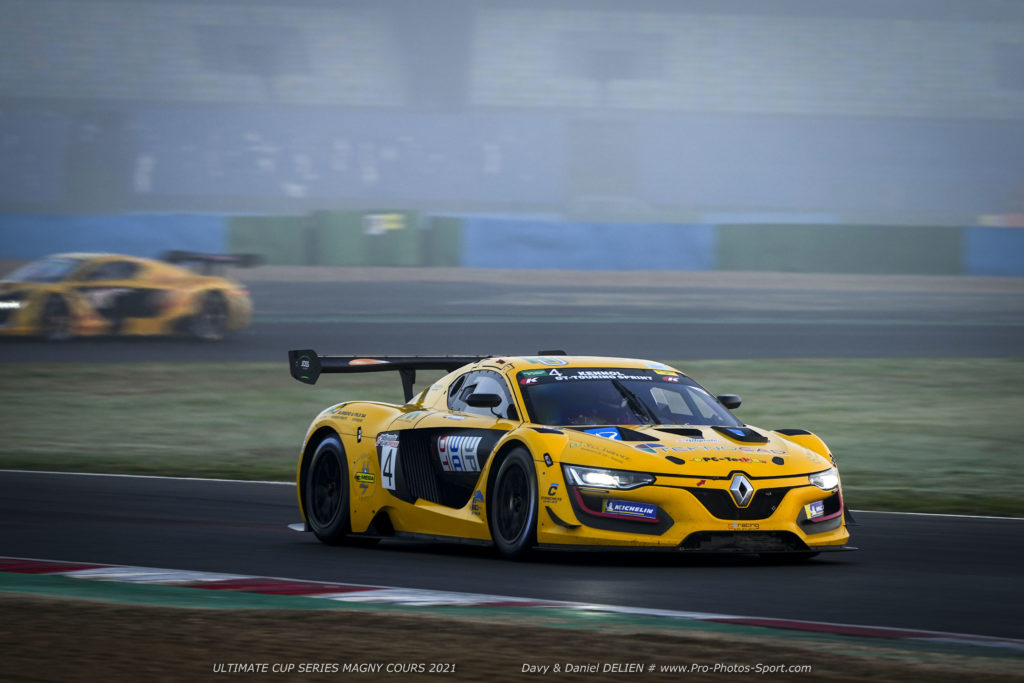 Marc Waechter (G2 Racing AG) was in a good mood on this Saturday morning, as he started on pole for the very first race of the weekend, at 8 am.

The Swiss driver Marc Waechter dominated qualifying on the Nivernais track, which he already knows well, and he took the four pole positions at stake at the wheel of the Renault R.S. 01 #4.

The debates began when the green flag was waved, with the poleman keeping the lead in the first few corners, against his Belgian rival, Bernard Delhez (AB Sport Auto) in the #30 Renault. The safety car had to intervene at the end of the first lap after Sébastien Thome in the #19 Peugeot 308 Cup (TSA/Clairet Sport) went off the track at the end of the Imola sequence.

After two laps of neutralisation, the race resumed, still under the command of Marc Waecther who was under no pressure to win for the first time this weekend. At the finish line, he was ahead of the championship leader Bernard Delhez by 3.7 seconds.

The match for the victory in the 308 Cup category was won by Jimmy Clairet (Team Clairet Sport), ahead of Florian Briché (JSB Competition). 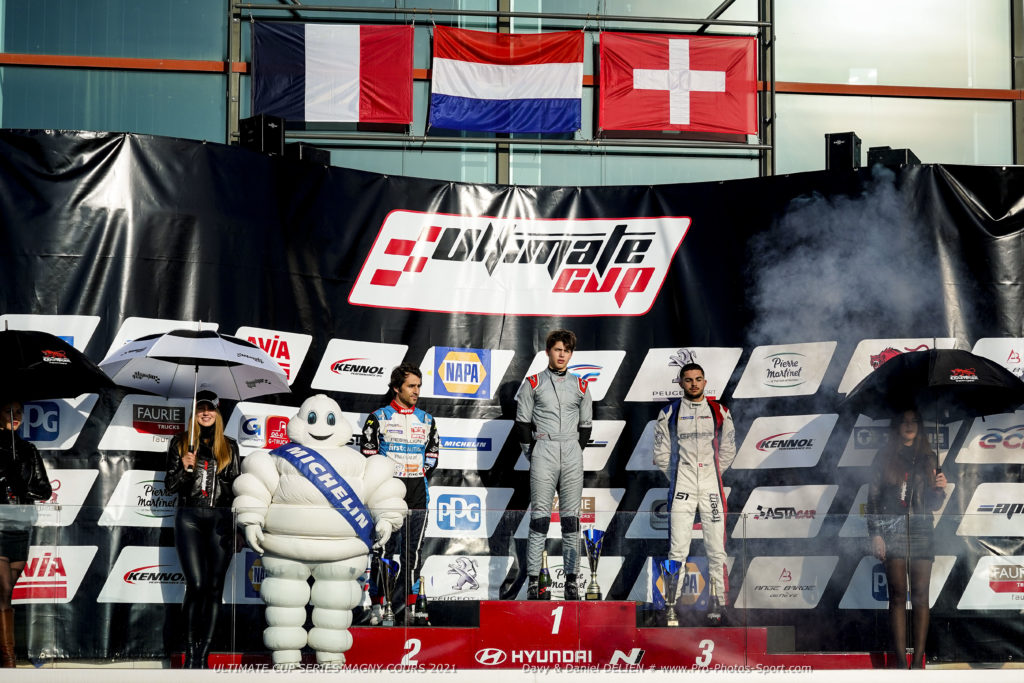 The remarkable debut of Laurens van Hoepen (Graff) in motor racing was not due to beginner’s luck. The young Dutch driver, just 16 years old, was the author of the two best times in qualifying on Friday to gain pole positions for the first two races in the Nivernais. Nicolas Prost (CMR) had not spared any effort, but failed to win the first pole position, only 14 thousandths behind.

These incredibly close gaps were a sign of great battles on the track. The first race did not belie this trend, all under a radiant sun.

Despite the pressure exerted by Nicolas Prost on the 2nd place of the starting grid and two interventions of the Safety Car, Laurens van Hoepen came to the end of the 20 minutes race. The driver of the #13 Graff F3R went on to win his third race since Le Mans. Nicolas Prost, leader of the championship, lost 4 seconds, while Théo Vaucher (Graff) climbed on the third step of the podium, which seemed to be promised to the Australian Dylan Young, but it was without counting on a spin of the latter, at mid-race, at the exit of the last chicane. 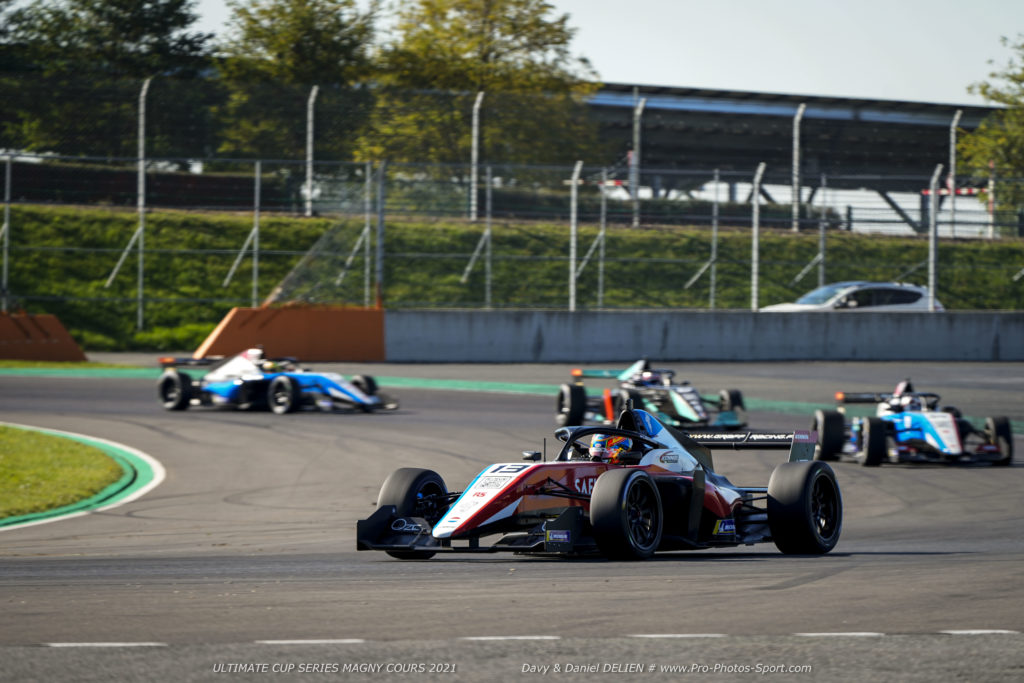 The 18 drivers competing this weekend took to the grid in their respective single-seaters, F3R or FR 2.0. The front row of the second of the three races on Saturday’s programme was identical to the first, with Laurens van Hoepen (Graff) on pole, ahead of Nico Prost (CMR) in second place.

As the lights went out, the driver of the #12 CMR F3R tried to overtake the poleman on the inside of the first corner, but van Hoepen brought more speed to the outside of the big curve to tackle the Estroil corner in the best possible position.     The Dutchman had then taken a few lengths of lead which was reduced to nothing when Carmen Jorda’s exit from the last chicane caused the intervention of the Safety Car.

A few minutes were enough to clear the track and the drivers were able to exploit the full potential of their car once again. The restart was a mere formality for van Hoepen, who retained the lead and won the race under the chequered flag with the fastest lap on the 11th and final lap of the race. He overtook Nico Prost, 2nd by 2 seconds, while Théo Vaucher (Graff) joined them on the podium thanks to his 3rd place at the wheel of the F3R #51 of Graff.

Bis repetita in the FR 2.0 with the new victory of Franck Seemann, at the wheel of the #3 of Race Motorsport, in front of his teammates David Delucinge and David Cristini. 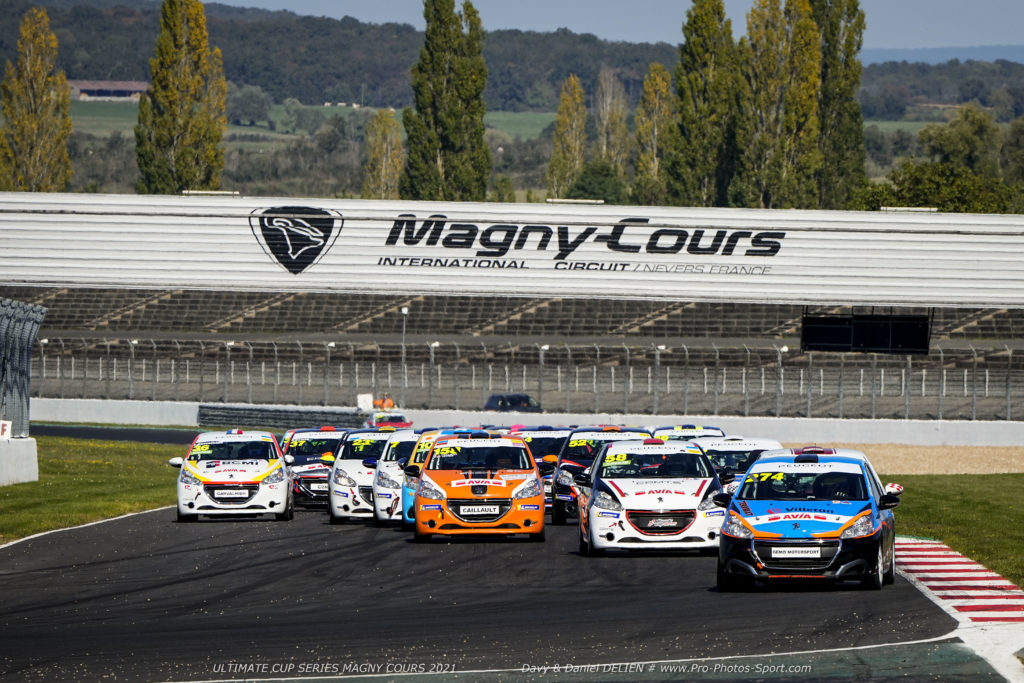 With 40 Peugeot 208 RCs entered, the starting grid for this first race of the weekend in the 208 Racing Cup was quite impressive.

The standing start proved to be chaotic with a collision in the middle of the field on the start/finish straight, which immediately caused the race to be interrupted. A red flag was displayed in order to clean up the fluids on the track, necessitating a 15-minute neutralisation.

With the countdown stopped, the race resumed under the impetus of the driver of the pole-sitter’s #74 Peugeot, Guillaume Blancardi. The Gemo Sport driver was determined to win his first race of the season and held his ground against his rivals, even when the cards were reshuffled by a safety car at mid-race.

The fight was tight until the last corners, as the gap at the finish line shows. Only 2 tenths of a second separated Blancardi from Viny Beltramelli, second for the Ropars Racing Team. 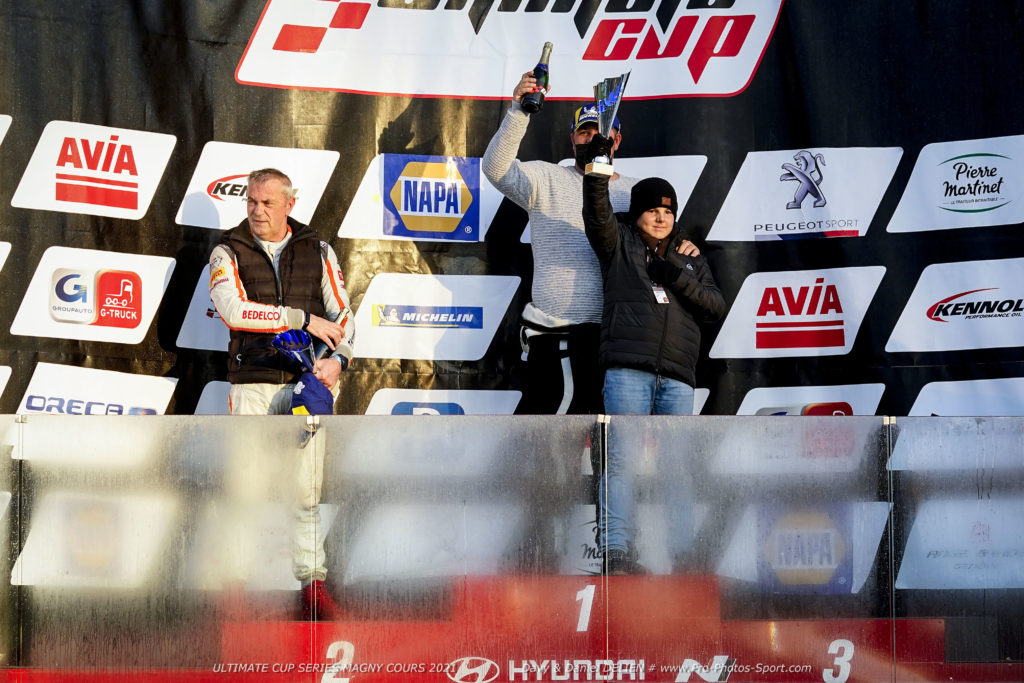 KENNOL GT-Touring Sprint, race 2: a breathless end to the race, victory for Waechter

Waecther managed to keep the benefit of his pole position for most of the race, but his Belgian rival came back in force. The intensity of the duel increased, Delhez took the lead and started the last lap in first position. But he lost the victory on the Estoril curve, spinning out and destabilising Waechter who also crashed. Waechter came out better and went on to win for the second time in a row this weekend, in a race that was not interrupted.

The Swiss rider of G2 Racing AG won the race with a 10 seconds advantage on Delhez and took precious points in view of the championship, led by the Belgian.

Claude Degrémont put on a show on the track, finishing in third place in the #87 CD Sport Ligier JS2 R.

The result of the first two races of the day, the starting grid of the third and last confrontation of the single-seater category saw Laurens van Hoepen (Graff), already double winner in the Nièvre, and Nico Prost (CMR), sharing the first row.

Positioned on the left side of the track, Nico Prost took off better than the Dutch poleman to take the lead from the first corner. In contrast to the first two races, there were no incidents that interrupted the on-track action and van Hoepen was always very much behind Prost. Despite the pressure, the CMR rider finished the 13 laps in the lead to win by one second over the young talent found by the Graff, also setting the best lap in the race.

Nico Prost takes a serious step towards the F3R title of the Ultimate Cup Series, even if the final round in Estoril will be weighted two and can reverse the trend, especially as with two podiums out of three, Théo Vaucher (Graff), maintains the suspense in the accounts.

Absent in the Sarthe, during the previous round, Eric Trouillet made a winning return in the Gentleman F3R category by winning all three races. 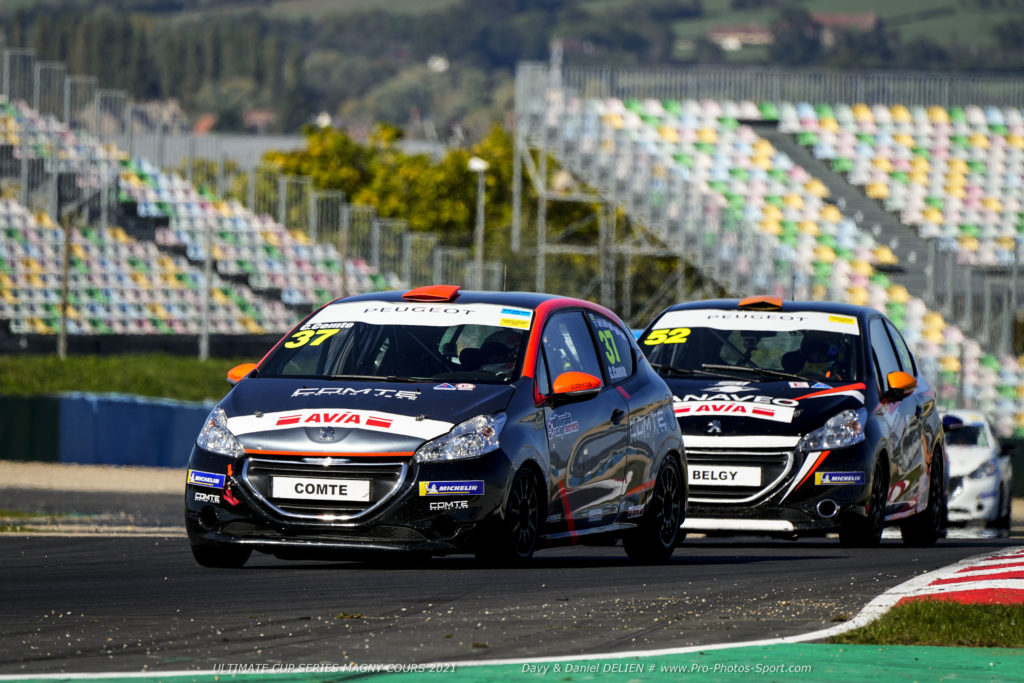 We were expecting a second race that would have been hard fought, but not as hard fought. Only 4 laps were completed in 20 minutes and the fate of the race was sealed before its end, following a run-off of the #71 Peugeot, which ended up on its right-hand side. Dominique Perroux, who was at the wheel at the time, was still in good physical condition.

Calvin Comte, who started on pole position, had to deal with an unpredictable race with two laps out of four completed behind the Safety Car. Calvin Comte will long remember this first victory in the Ultimate Cup Series, ahead of Pierre Monmaneix (GPA Racing) and Joan Caillaut (Jean Pat Racing).

Colin Boreau (Boreau Racing Team), at the foot of the scratch podium, won the Junior category, while Thierry Blaise (New Team Competition) was once again the best Gentleman of this race. 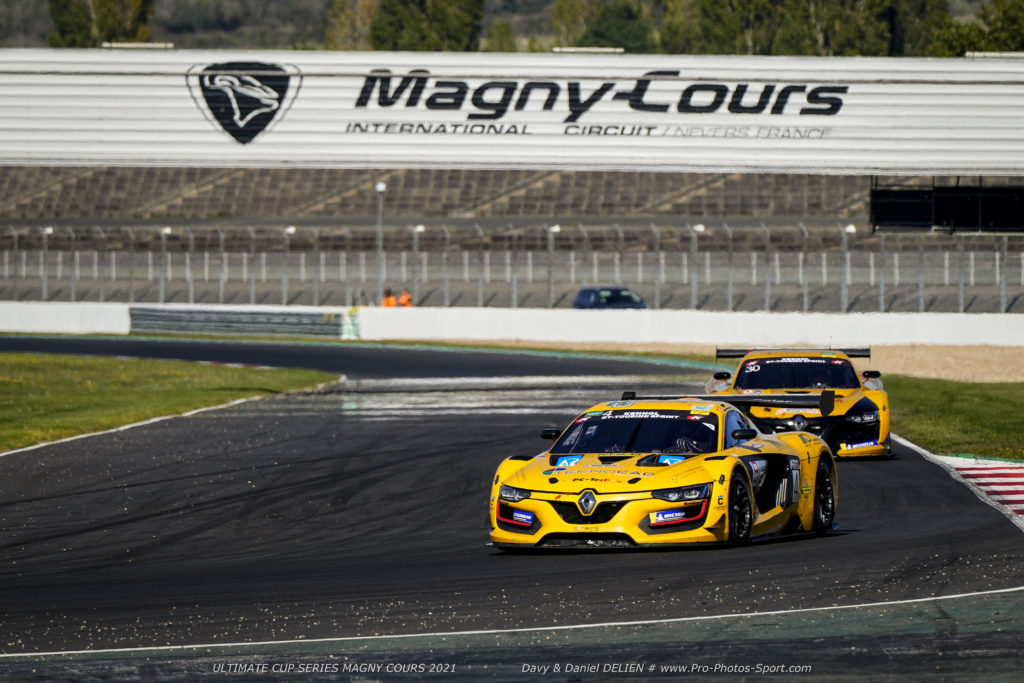 Three wins out of three. The balance of the day could not have been better for Marc Waechter who finished the day as he started it, namely on the top step of the podium.

The Swiss driver of the Renault R.S. 01 #4 of G2 Racing AG, who started on pole, did not leave any door open to his opponent, Bernard Delhez. The latter finished the race in 2nd position at the wheel of the Renault #39 of AB Sport Auto, less than 2 seconds behind, despite the best lap in the race to his credit.

Jimmy Clairet (Team Clairet Sport) also won the Peugeot 308 Cup, ahead of Florian Briché (JSB Compétition) who was unable to win in the Nièvre region. 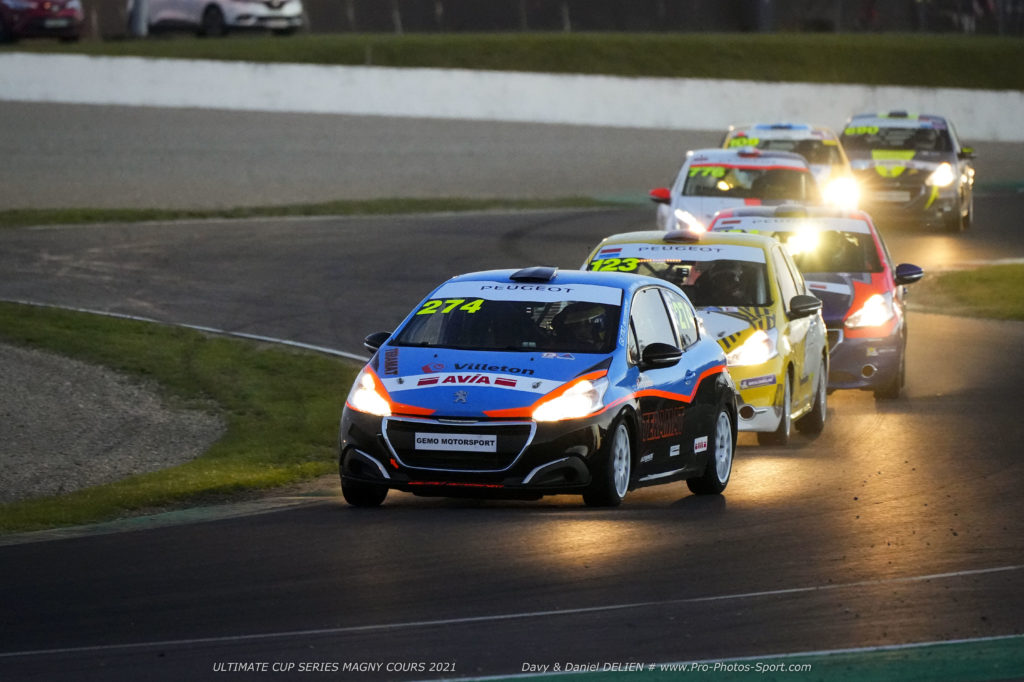 The Relais 208 field has been expanding since the start of the season and has reached a record number of entries with no less than 36 Peugeot 208 RCs lining up for the 4-hour race, with a finish in the middle of the night.

The drivers playing on both the 208 Racing Cup and the 208 Relay have the advantage, on paper, of knowing the track better at the wheel of these cars. This was reflected in the qualifying hierarchy, with Alexandre Finkelstein and Pierre Monmaneix, for GPA Racing, taking pole.

However, it was the duo that started on the front row of the grid, in 2nd position, that saw the chequered flag first. Bastien Pasquier and Guillaume Blancardi, winners in the 208 RC earlier in the day, led 69 of the 98 laps covered in the Gemo Sport Peugeot #274. The #776 ACAC – LP Motorsport team of Fabien Frazao, Maximilien Mulder and Valentin Belgy were 11 seconds off the pace, while the GPA Racing Polemen took third place.

Laurène Godey and Sébastien Loeb had a superb race for their first participation at the wheel of a 208. The couple finished in 5th place overall!

See you this Sunday for the continuation of the hostilities and the last six races of the weekend in Monaco to be followed in live streaming.