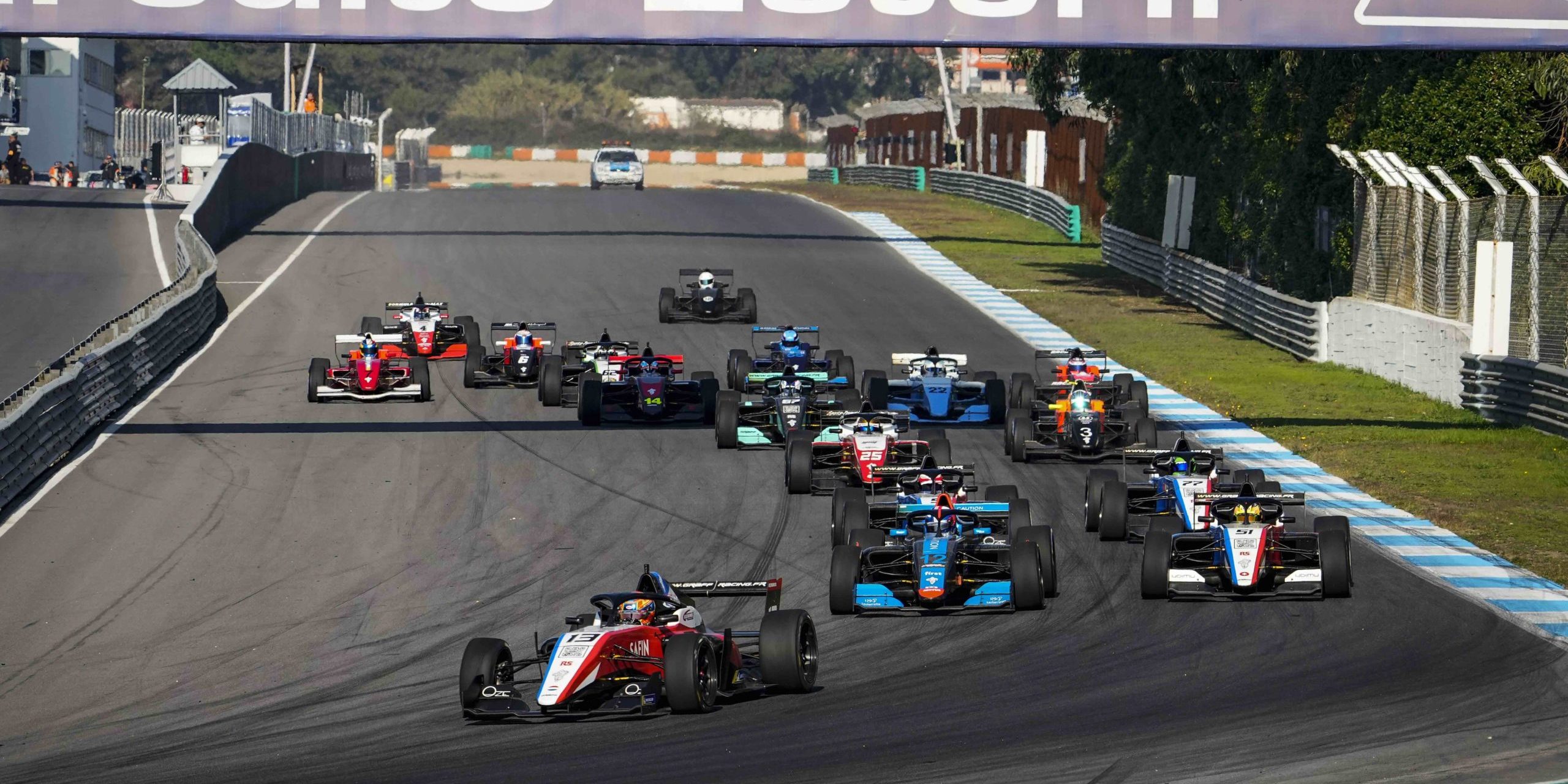 The stakes were high for most of the competitors present in Estoril, the scene of the Ultimate Cup Series Final.

The final Sprint races were held in Portugal on Saturday, crowning the 2021 champions in their respective categories.

The day ended with the 208 Relay race, which was run entirely at night, while the NAPA GT-Touring Endurance (4 hours) and the Proto Endurance (3 hours) will be the highlight on Sunday. 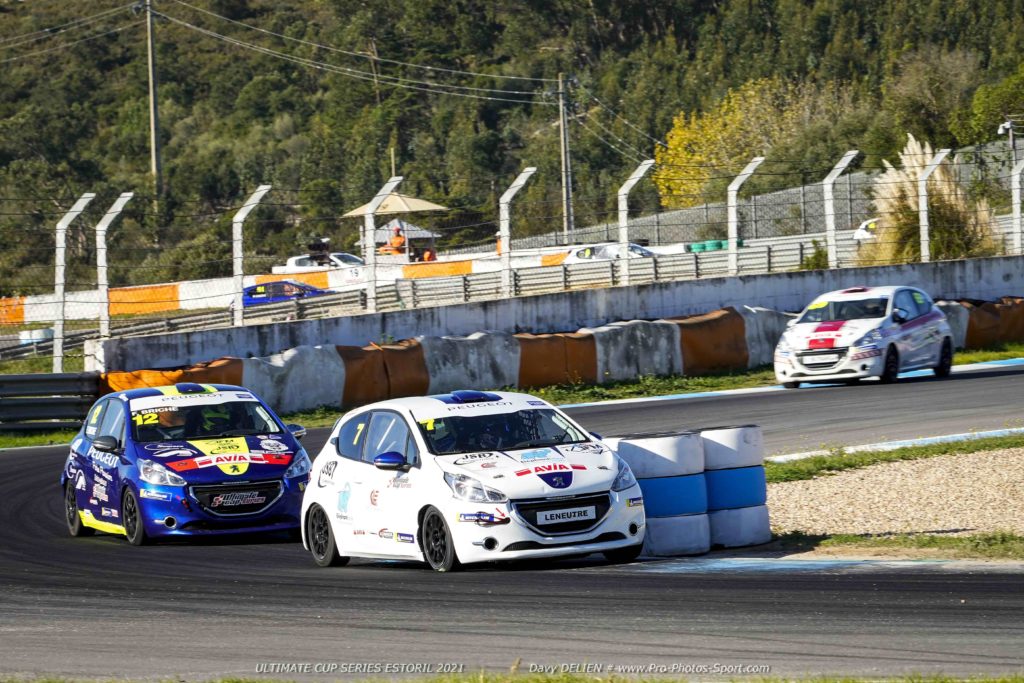 Given the change of programme, this third race is in fact the last confrontation of the season for the 26 Peugeot 208 Racing Cups competing this weekend.

The first row of the starting grid pits the two JSB Competition drivers, Florian Briché and Joran Leneutre. Despite his young age, 16 years, the latter does not let himself be intimidated by his teammate and takes the advantage at the beginning of the first turn. The driver of the 208 n°7 was followed by Florian Briché, huddled in the rear wing of the leader, during the 10 laps of the race.

Joran Leneutre doubled his win this weekend by triumphing in the general classification under the chequered flag, and also won the Junior category, in which he definitively locked up the title. Florian Briché lost by only 182 thousandths of a second, while Viny Beltramelli (Ropars Racing Team) was not able to join the fight for victory.

Thierry Blaise made a clean sweep by winning the third race in the Gentleman category for New Team Competition.

The Peugeot 208 Racing Cup race 4 was cancelled due to the weather conditions following the premature end of the day on Friday. 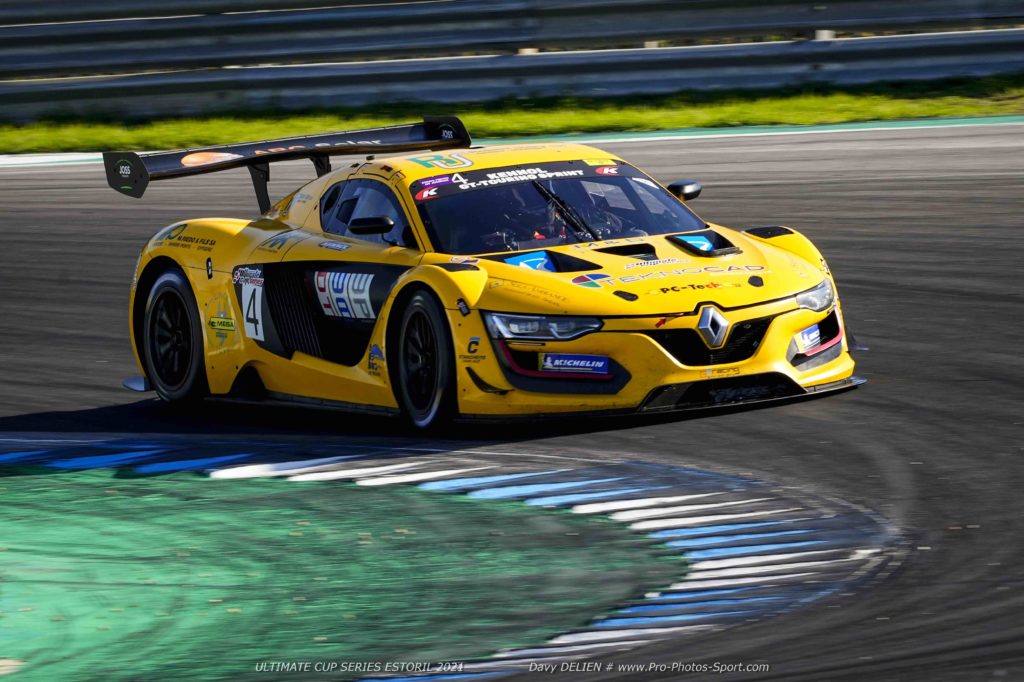 The drivers and teams of the KENNOL GT-Touring Sprint were left with a taste of unfinished business after the premature end of the race last night, especially at the front.

They lined up on the starting grid with the firm intention to fight it out, in particular the drivers of the three Renault R.S. 01s, Marc Waechter (G2 Racing AG), Gilles Colombani (Clairet Sport) and Bernard Delhez (AB Sport Auto), positioned in this order on the starting grid; the #83 Mercedes-AMG GT3 (Racetivity) was once again absent.

Pole-sitter Marc Waechter held the lead at the start, closely followed by Gilles Colombani, who was himself under pressure from Bernard Delhez. The stakes are high as this victory could well seal the fate of the championship in this category. In the lead, the Swiss rider, who is also leader of the championship, escapes while the battle is raging behind him. Bernard Delhez was increasingly pressing on Gilles Colombani and the two Renaults were door-to-door in the first corner. Contact was inevitable and the Renault of Bernard Delhez spun a few minutes after the start.

Despite some damage to each Renault, the drivers continued their race. Marc Waechter won his first race in Portugal, which will allow him to start the last race in the best possible conditions in his quest for the title. Gilles Colombani and Bernard Delhez follow in the hierarchy and on the GT Class 3A podium.

Jean-Christophe David (BHK) won the Porsche Cup, ahead of the Aston Martin Vantage of PROsport Racing, three times winner in GT Class 5A, while the honours in the 308 Cup went to Sébastien Thome, who took advantage of Jimmy Clairet’s technical withdrawal in this category. 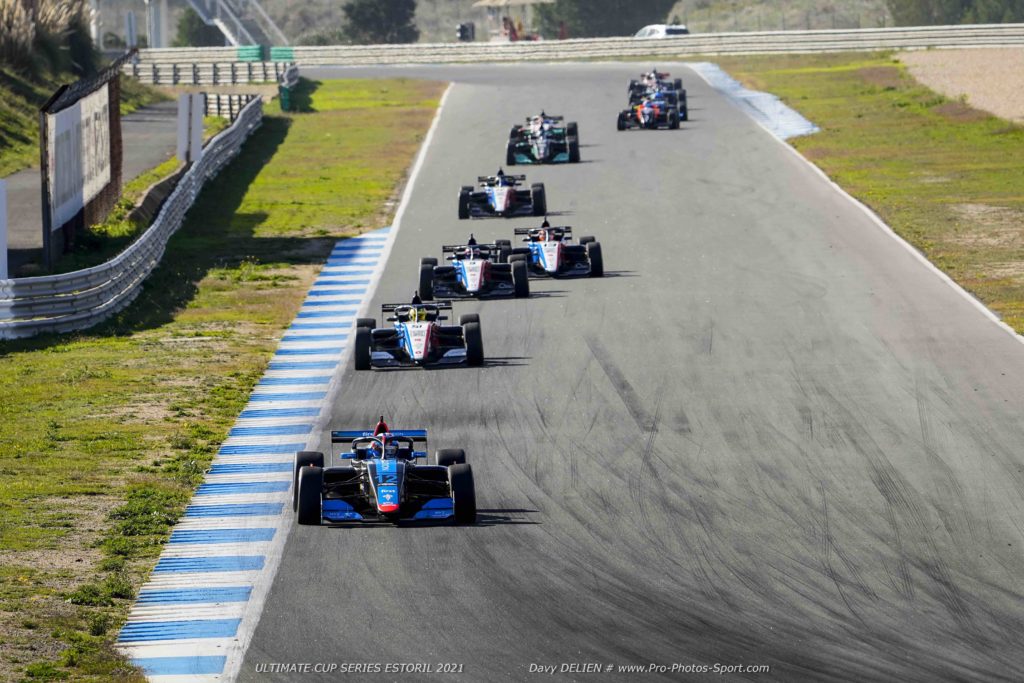 As in the first race, Laurens van Hoepen took the lead on the starting grid for the second race of the Portuguese weekend.

The driver of the F3R n°13 of the Graff is joined by Nicolas Prost and the F3R n°12 (CMR) on the first row, while the two other drivers of the Graff, Théo Vaucher and Eric Trouillet share the second row.

At the end of the race, Nico Prost was the best to take off from his place to catch up with the poleman. The battle was fierce between the two men in the first corner, Nicolas Prost got inside, did not let go and forced Laurens van Hoepen to go wide after a slight contact and fell in third position, behind Théo Vaucher, now second behind Prost.

The debates in the FR2.0 class were also tough, and the first corners were a real mess. Max Bortolami was left out of the race, oil was spilled on the track and the race direction decided to neutralize it, first with a Safety Car, then with a red flag.

The cars still in contention then repositioned themselves on the grid, in the same positions as at the start. Prost lost the advantage of his excellent start, to the benefit of van Hoepen who regained first place.

In addition to the incident in Turn 3, a fire broke out in the FR2.0 of class leader Franck Seemann. The car had to be evacuated and the fire extinguisher residue had to be cleaned up.

After a long wait, the start was given under the Safety Car, which disappeared at the end of the lap. The hostilities started again for 16 minutes, under the impulse of the Dutch poleman who managed to keep Prost at a good distance. Despite a small mistake, van Hoepen kept the advantage to win the second race of the weekend, more than 6 seconds ahead of the CMR driver, who is assured of the 2021 F3R Ultimate Cup Series title. Théo Vaucher completed the podium for Graff.

It was a double victory for the French team, who also won the Gentleman class, with Eric Trouillet fighting hard with his teammate Luis Sanjuan.

Taking advantage of Franck Seemann’s setbacks, Shannon Lugassy led the #55 CMR FR2.0 to the top step of the podium in this category. 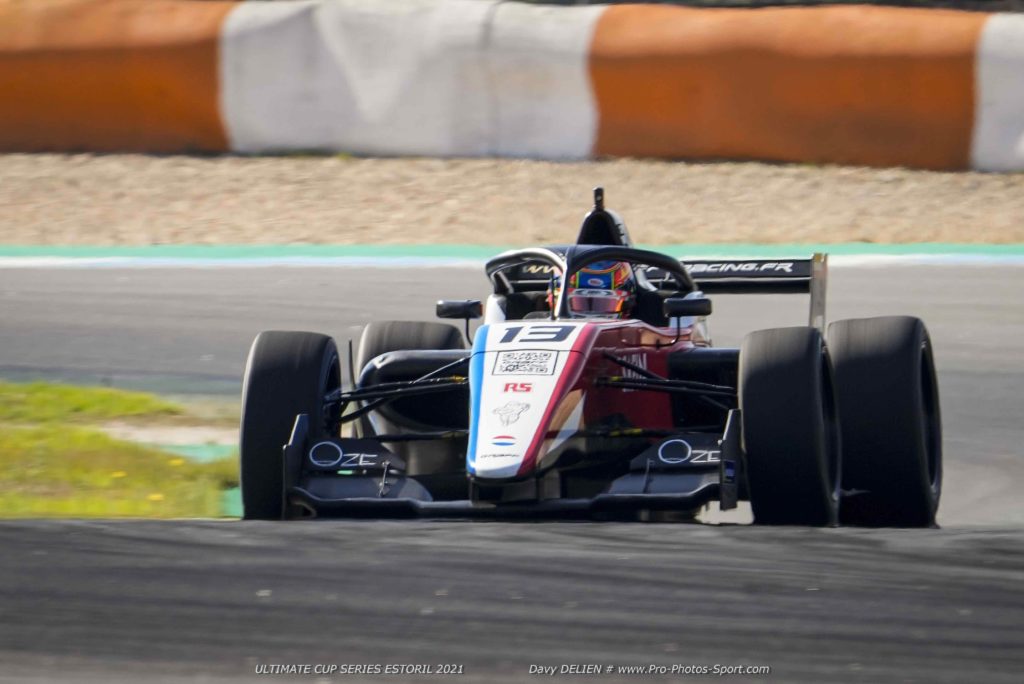 20 minutes. That was the duration of the final confrontation of the 2021 season of the Ultimate Cup Series Single Seater Challenge. The field, which still consists of around twenty cars over the whole season, has provided us with some sublime battles.

This was once again the case in race 3, which was run in optimal weather conditions, as it has been since the beginning of the weekend.

Laurens van Hoepen was on pole thanks to his two previous victories, and he got off to a very good start in the F3R n°13. The number 13 is the winning number of the day, on Saturday 13 November, as the young Dutchman, barely 16 years old, took the last victory of the season without the slightest dispute, relegating Théo Vaucher to almost 7 seconds. The latter, whose performances and results have been on the rise for several races now, offers a one-two to the Graff, while CMR driver Nicolas Prost finishes on the third step of the podium, which won’t change anything in the championship as he was already assured of the title yesterday.

Shannon Lugassy (CMR) finishes the season in style by winning the FR2.0 class. 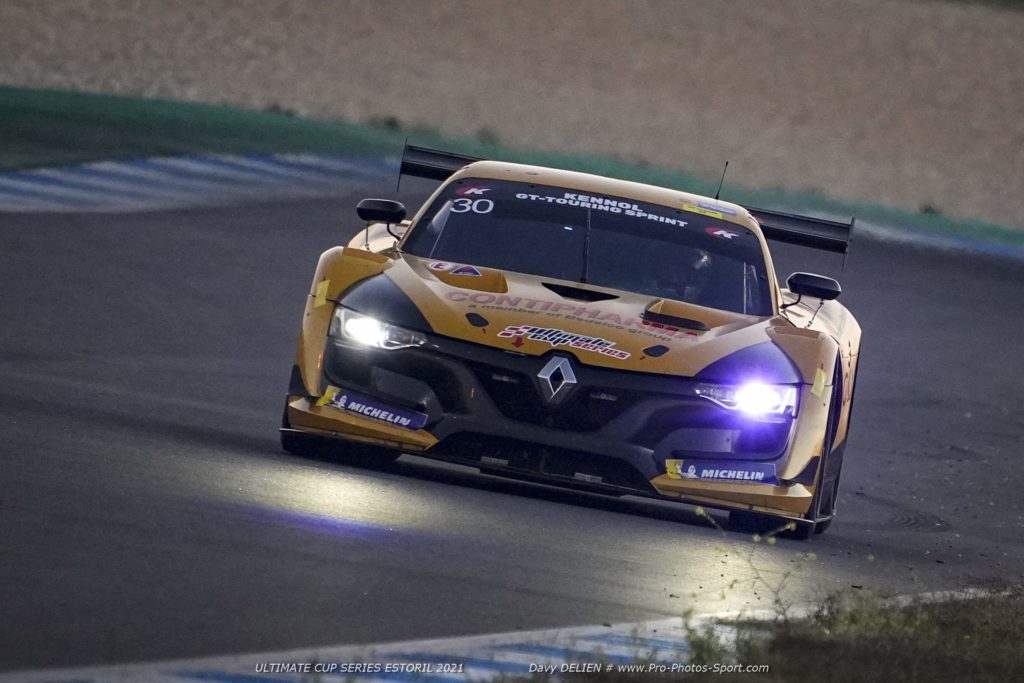 The tension is at its highest for this final race of 25 minutes. The GT Class 3A title of the KENNOL GT-Touring Sprint is at stake.

The duel between Marc Waechter (G2 Racing AG) and Bernard Delhez (AB Sport Auto) entered a new dimension, as the driver who finished ahead of the other won the title.

On pole, the G2 Racing driver saw the Belgian come up to his level on the straight at the start. On the outside of the first corner, Bernard Delhez managed to take the lead, which he would not relinquish for the next 16 laps. Despite all his efforts on the track, Marc Waechter lost the title by a single point, in favour of the AB Sport Auto driver.

Freelancer this weekend, Corsican Gilles Colombani (Clairet Sport) can be satisfied with his Portuguese weekend, with a victory, a second and two third places. 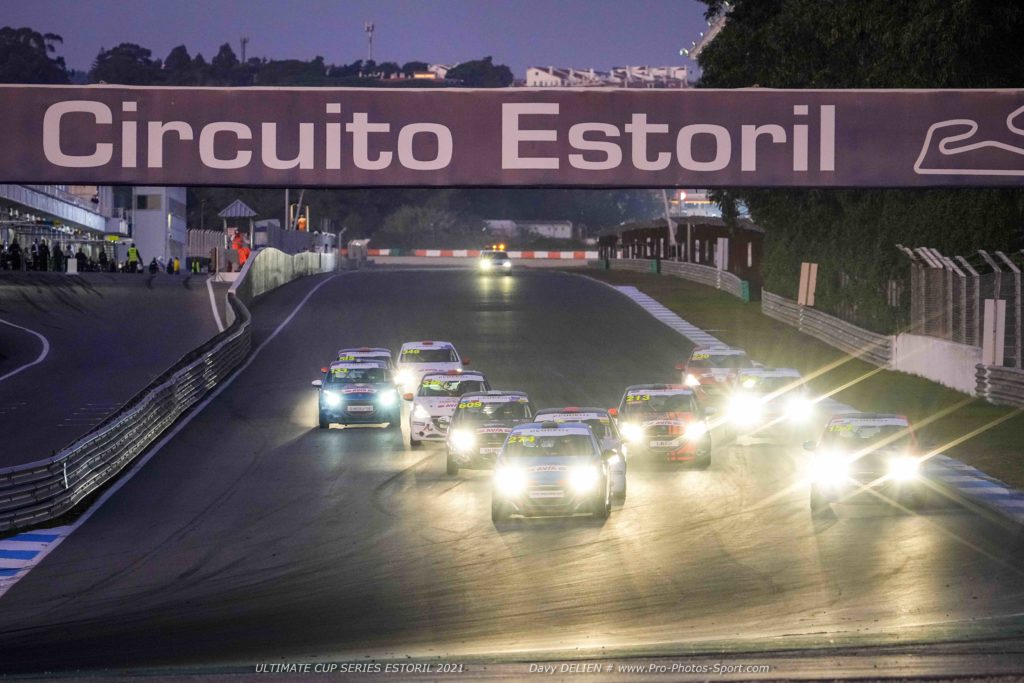 Relay 208: Bastien Pasquier and Guillaume Blancardi at the end of the night

For this last round of the 2021 Relay 208 season, it was an all-night race during which the drivers competed, bearing in mind that the title was at stake here.

In the game of the average of the two best times for each team, the times were very close at the end of the qualifications. Dominique Bastien and Guillaume Blancardi were the fastest for Gemo Sport, the leading team in the championship, ahead of FG Sport by Poissy, and its drivers Sébastien Gehin and Marc Fleurance, separated by less than 4 tenths. GM Sport placed its two crews on the second row of the starting grid.

The green flag was waved at 5:39 pm precisely, and the competitors set off for a three-hour race. The poleman in the Peugeot 208 #274 (Gemo Sport) kept the lead, followed closely by his closest rivals in the 208 #154 (FG Sport by Poissy). The two men in the lead are having a great battle at the front of the race, while one driver stands out for his great start. Mathieu Sentis, journalist-tester of L’argus, started 5th on the grid and was already up to 3rd position after 3 laps, for New Team Competition.

A trio broke away from the rest of the field. The three cars were separated by only a few tenths and yet the battle continued for several more laps. FG Sport by New Team took control of the race for the first time on lap 20, but Gemo Sport took over the lead at the end of the first hour, still under the eyes of the New Team Competition driver.

The battle continued, but the first pit stops and driver changes created bigger gaps in favour of the leading team. Gemo Sport entered the last hour with a lead of more than 20 seconds over New Team Competition, but the last hour could still hold some surprises, especially as several compulsory stops still had to be made.

The crew of the #154 Peugeot entered the final laps of the race in the lead, but reached the finish with one more mandatory stop to make. Sébastien Gehin and Marc Fleurance were given a penalty and the victory went to Guillaume Blancardi and Bastien Pasquier who, by winning, offered the title to Gemo Sport. GM Sport finished 2nd with the 208 n°409 driven by Benoît Marion and Olivier Martinez, while Mathieu Sentis and Thierry Blaise (New Team Competition) completed the podium.

A great start to the weekend in Estoril!
13 November 2021