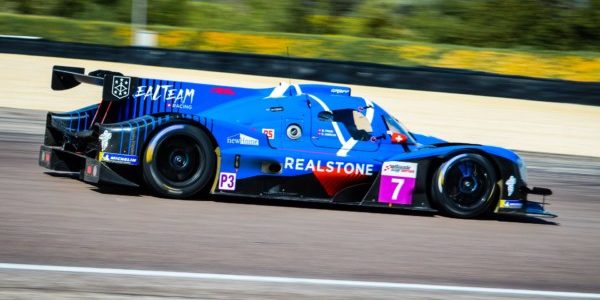 The second round of the Ultimate Cup Series was this weekend at the Dijon-Prenois circuit in Bourgogne, in very difficult conditions. After setting the eleventh fastest time in the qualifying session, the Norma M30 #7 of Realteam Racing had to abandon due to contact with another competitor in the first lap of the race.

A disappointing result for Realteam Racing, who finished third on the podium in the Prestige category during the opening round at the Estoril circuit in Portugal.

« The weather was difficult all weekend long with a changing track, alternating all imaginable weather conditions forcing us to change tyres and trajectories all the time, explains Sébastien Page. The Team has once again done an excellent job, providing us with a good and balanced car. Unfortunately, we finished our race in the first lap after being hit by a competitor. We were not lucky this weekend. See you at Slovakia Ring. »

« A difficult weekend in Dijon, with variable weather conditions from rain to dry during the tests and a collision with a competitor who hits us after a spin just after the start at the third corner,” says Esteban Garcia. This caused us to abandon the race as the damage could not be repaired in the stand. Now the round of Dijon has already been closed and we are focusing on the next race. »

The next round of the Ultimate Cup Series will take place on the Slovakia Ring in Slovakia on May 24 and 25. Before that, the Esteban Garcia team will be on track in Italy on the Monza circuit for the second round of the European Le Mans Series.