For this last day of the Ultimate Cup Series meeting on the Dijon-Prenois circuit, the weather conditions had not improved, and were even worse than the day before. At the beginning of the morning, the temperature was 4°C, which was obviously not very favourable to set the tyres at the right temperature, and as a bonus, there was a succession of glacial showers as well.

The GT opened the Sunday program, a day dedicated to GT and CN. The GT were the first on the track, early at 8:30 am for a sixty-minute session.

These qualifications were going to be very competitive between the Renault R.S 01/DEMJ and AB Sport Auto Auto, the Ferrari 488 GT3/Visiom and the Solution F.

However, the pole position was determined according to the average achieved by the drivers and it was the Ferrari #1 (Jean-Paul Pagny/Thierry Perrier/Jean-Bernard Bouvet) that took this pole position in 1.28.592, just ahead of the Renault R.S 01/DEMJ #23 (Lucien Crapiz/Massimiliano Mugelli) – winner of the first race of the season at Estoril – with an average of 1.28.882. The second line combined the Renault R.S 01 #46 (Tiziano Carugati/Mario Cordoni/Gregory Segers) in 1.29.397 and the Solution F #87 (Gérard Faure/Stéphane Pourquié/Jonathan Cochet) in 1.30.091.

The CN followed the GT for a 3 Hour race. Two Norma M20 FC Honda Norma M20s were in the first line, with the Krafft Racing Norma #2 in pole position on wich Dominique Cauvin started. He had the Norma #4 ASP Racing at his side and it was Antoine Robert who was starting on this car. The Wolf GB08/Avelon Formula #55 of Davide Pigozzi/José Ibañez followed, then the Norma Krafft Racing #1 of Max Bortolami and David Cristini and the Wolf GB08 #45 of Ivan Belarosa/Guglielmo Belotti.

Dominique Cauvin started in pole position but he was quickly pushed by Matteo Pollini of Wolf #44 who started like a bullet. Norma #2 was in a spin and found itself in last position even before the end of the first loop.

Ivan Bellarosa and Wolf #45 were in the lead at the end of the first lap, followed by Norma #4 by Antoine Robert and Wolf #44 by Pollini. Antoine Robert was very incisive and from the third lap he overtaked Bellarosa to take the first place, increasing the gap on the Italian driver, himself detached from his compatriot Pollini. Max Bortolami was fourth with Norma Krafft Racing #1, ahead of Davide Pigozzi and Wolff #55.

After his misadventure in the first lap, Cauvin moved up in the peloton, skipping his opponents one by one, so much so that by the 19th lap he had already moved up to third place. On the 23rd lap, Pigozzi started at the mistake and hit hard, it was the end of the race for Wolf #55.

It was not the day of the Italian protos who were all giving ground and after the first third of the race, Antoine Robert was one lap ahead of Norma Krafft Racing #3 of Norbert Sauvain second and three laps behind Paul Aegerter of Norma #2 who had relayed Cauvin.

Then the positions stabilised. Antoine Robert had passed the relay to his father Lionel and Norma #4 was in the lead. Daniel Basra, and Jarno, who started at the bottom of the peloton, were racing regularly and after two hours of racing the Norma DB Autosport #21 was even in second place, but closely followed by the Norma #2 and the Norma #3, on the same lap as her. The Wolf #45 had made a nice comeback that brought her to third place, but the bursting of a tyre was a waste of time, first on the track, then at the pits, and she was downgrading. 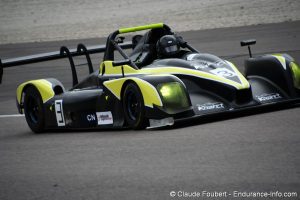 The Norma of Krafft Racing continued at a good rhythm and soon ousted the Norma DB Autosport from its position. At the front, freed from the Bellarosa threat and with their good lead over the Norma #2 of Cauvin/Aegerter, Lionel and Antoine Robert were in a calm race, controlling the situation.

Two cars were going to disappear from the ranking, the Wolf #45, on lap 70, while the Norma #1 had abandoned a little earlier after an off-track collision that had damaged the car. 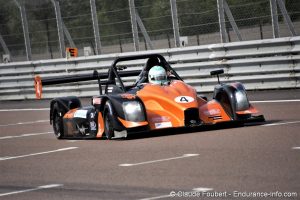 The conditions – we repeat – were not ideal before the start, with a cold and humid track and a more than threatening sky, which did not augur anything really pleasing.

The starting grid, even if we hope it will be more complete as the season progresses. Thierry Perrier started from pole position with the Ferrari 488 GT3/Visiom and had at his side the Renault R.S 01/DEMJ #23 of the Italian Massimiliano Mugelli who is not the type to dawdle on the way. In the second line, behind Thierry Perrier, the experienced Mario Cordoni (Renault R.S 01/AB Sport Auto #46) was ready to move up to the front, just like Stéphane Pourquié (Solution F #87), even if we could have expected a wise start from Pourquié. 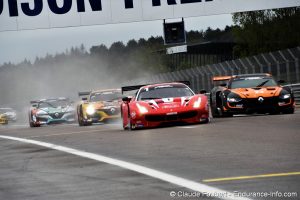 The start was given on the track, with the GTs lifting some water spouts. Thierry Perrier had warned, he would not defend his preferential position too much and Mugelli and the R.S 01 DEMJ #23 took the lead and broke away. The Ferrari/Visiom was second with a nice margin on the R.S 01 #46 of Cordoni, while Pourquié remained in fourth position with its solution F. 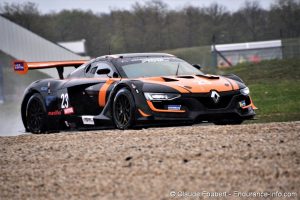 Mugelli continued at the same rhythm while Cordoni raised his. The Italian came back to Thierry Perrier and overtaked him on the eighth lap.

At the start of the first hour of the race, the hierarchy was unchanged with the two transalpine drivers in the first two places ahead of the Ferrari, Italy invading Bourgogne…

The first change occurred a little later, with the stop of Mugelli who passed the relay to Lucien Crapiz, which caused several places to be lost at the R.S 01. 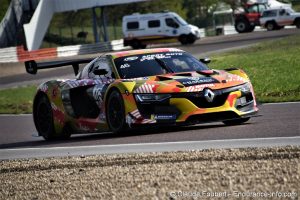 One Renault was chasing another and Cordoni was in command in front of the Ferrari, the Solution F, the Renault R.S 01 #45 and the Vortex #701 which had been frightened a little earlier, starting in a spin, caught in the rain, but leaving the grass without damage.

Few changes in the following hour, depending on showers and neutralisation. After its pilot change, the R.S 01/DEMJ had moved up front and was second place at mid-race behind the R.S 01 #46 onboard which Grégory Segers was not playing on the track – at that moment he had the best lap in the race in 1.22.589 on a still tricky track. Jean-Paul Pagny, who had taken over from Thierry Perrier, was third, but two laps behind the two RS01, each separated by one minute. 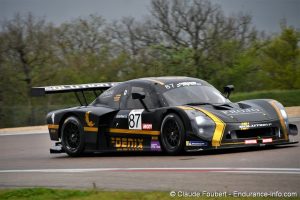 The R.S 01 #46 kept the lead but just before the start of the last hour of the race where Mugelli temporarily replaced the Renault Sport R.S. 01/DEMJ in the lead, temporarily since two laps later he stopped and Lucien Crapiz started again in third place, behind the R.S 01 #46 from Tiziano Carugati. Jonathan Cochet had taken over from Solution F #87 and was hardly fighting. He improved the lap record in 1.17.099, the track being a little more performance friendly.

The battle for victory would now involve the R.S 01 of Carugati and the Ferrari/Visiom of Jean-Bernard Bouvet. The track became difficult again. Jean-Bernard Bouvet was faster than Carugati. He had made the effort at the beginning of his relay, regularly dropping his time laps and the Ferrari won its first victory of the year, ahead of the R.S 01 #46 of Carugati/Cordoni/Segers, the R.S 01#23 of Mugelli/Crapiz and the Solution F#87 of Cochet/Faure/Pourquié.

The watchmaker, pilot and sponsor, creator of a luxury brand of the same name, died two months ago following an accident at the Paul Ricard circuit in Le Castellet. Aged 77, Philippe Charriol, who had been skimming the circuits for many years, lived his passion for motor racing to the very end. 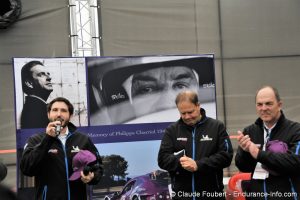 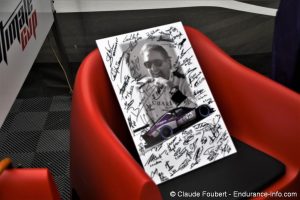 Many pilots were present and all autographed a portrait of Philippe Charriol. R.I.P.

The Mitjet Sprint for neophyte.

It is one of the five disciplines on the 2019 Ultimate Cup Series calendar. In Bourgogne, 19 Mitjet were on track, with sketched looks from Mercedes, Audi and BMW.

Benjamin Diaz, Team Manager of Pole Position 81, who commits Mitjet #18 of Christophe Lefranc and #55 of Bruno Cosin, has kindly given us some details.

There are two categories in Mitjet Sprint…

What is the typical profile of a Mitjet pilot?

« There are none… All the pilots come from different backgrounds. There are young pilots and older ones. Some come from prompting formulas, there are former F4 drivers, others have raced in the past and are returning to competition, some are pure amateurs, there is a little bit of everything, but it is the same passion. »

How much does a Mitjet season cost? 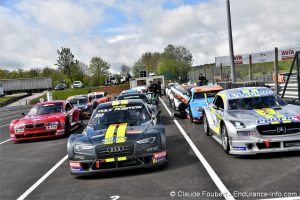 The bodies are diversified, but are there several manufacturers?

« No, there is only one, Mitjet Motorsport, which offers three different body types: Mercedes, Audi and BMW. Each team chooses its own bodywork. »

Almost twenty Mitjet, is that good or does it require more?

« Dijon, it is the first meeting of the season, but there will certainly be a lot more, I think there are about a hundred Mitjet in France, so it will be bigger. »

Four 20-minute races were offered to the competitors this weekend and the level of competitiveness is more than satisfactory, with four different winners in Super Tourism and therefore in the scratch, while in 2L Matthieu Valette, the driver of the Mitjet #70 of DNS Racing, has been brilliant with three wins but with narrow margins, and has even reached the scratch podium.