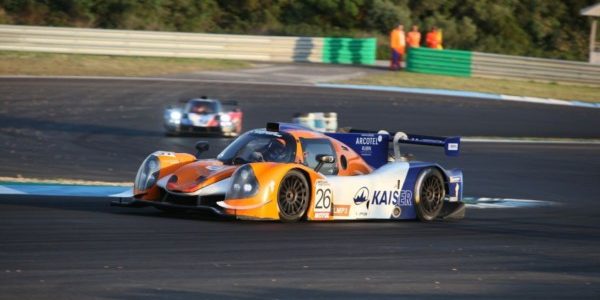 On the 22nd and 23rd of March 2019 we witnessed the first race of the Ultimate Cup Series, 4 hours of endurance racing on the portuguese circuit Estoril, with a grid made up of fourteen LMP3 cars, eight of them being Ligier JS P3’s. After the first round, pole position, the top 6 and fastest lap time in race were all held and completed by Ligiers!

It was a fantastic performance by Ligier JS P3 n#26 of team Wimmer Werk Motorsport as they were  victorious all week-end: fastest lap in FP, secured pole position, fastest lap time in the race and went on to win the race! On Saturday morning, the austrian team were the first to get pole position of the series. Drivers Vincent Capillaire, Lukas Dunner and Matthias Kaiser secured an average time of 1’33.267, beating the Norma #16 by 0.347 secondes. It was a well earned reward for the team as they worked all night changing the engine following a failure during F.P.2. The Ligier JS P3 #26 started the race at the back, following a misunderstanding of the starting process, with Matthias Kaiser at the wheel, going further up the leaderboard one place at a time, until he secured 4th position. Vincent Capillaire took over and did the fastest lap of the race with 1’33.082. After that it was up to the austrian driver Lukas Dunner, aged 16, to drive the Ligier. With one hour to go, he was second, behind the Ligier JS P3 #94 of Team Virage. Being faster than his competitors he took the lead and started to pull away. He crossed the finish line in first position with over a lap ahead.

The Ligier JS P3 #14 of the polish team Inter Europol Competition, started second on the grid with Paul Scheuschener at the wheel. At half way, they were fourth. They changed driver, and so it was up to Edward Jonasson to drive. It was in fact the first in an LMP3 car for the swedish driver. At the end of his stint, he was leading the race! And after their third and final driver change, Simon Philips was fifth. He got back into fourth position, and under the yellow flag for the last 5 minutes of the race, he finished third.

Starting 9th on the grid, was the JS P3 #6 of Graff Racing, driven by Didier Beck, Nicolas Chartier and Emilien Carde, they finished fourth after having success during the whole race.

The Spanish team Speed Factory Racing put on a good performance with their two Ligiers, cars #4 and #5. After starting fifth on the grid with car #4, Danil Pronenko, Alexey Chuklin and Pierre Fontaine were all consistent and finished in that same position. The sister car, the JS P3 #5 driven by Miguel Abello and Alvaro Fontes, started eighth on the grid, missed out on the third place of the podium after spinning with 5 minutes to go, causing the yellow flag to be waived. They finished in sixth position.

The Ligiers dominated the top 6 of this first race, forcing the first Norma to come seventh:

All of the Ligier JS P3’s finished the race with the exception of car #84 of the french team SRT41, having to abandon the race following an off, damaging the car.

The next meeting is set for the 26th-28th of April at Dijon, for the second round of the Ultimate Cup Series.