Last of the five races of this Bourguignon weekend raced on Sunday afternoon, April 28th at the Dijon-Prenois Circuit, the GT race was finally only played during the very last minutes of the four hours of this final meeting ! 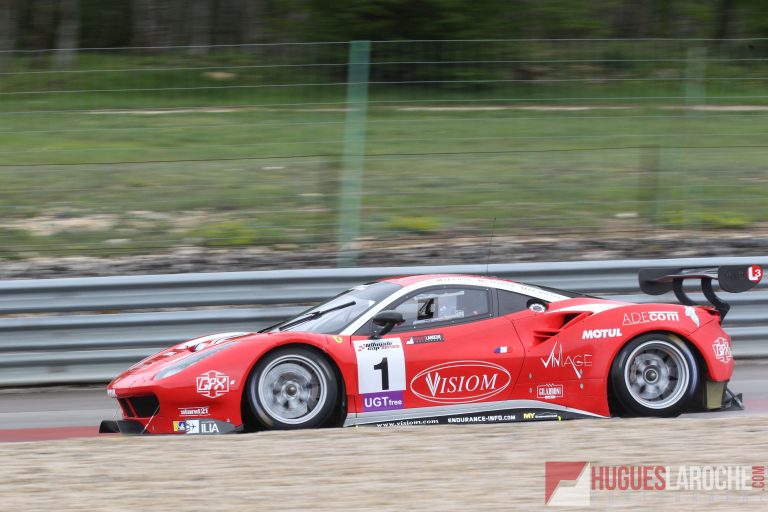 Indeed, since the start, two of the three Renault RS01 had been leading with the N°46 of the AB Sport Auto team of Bruno Abric and shared by the Tiziano Carugati and Mario Cordoni crew, supported by the young and talented Greg Segers and the N°23 – winner of the inaugural round of the Ultimate Cup Auto Series, in March at Estoril in Portugal and entrusted here to the duo Lucien Crapiz-Max Mugelli, it was indeed the Ferrari F488 of the Visiom team that won the final ! 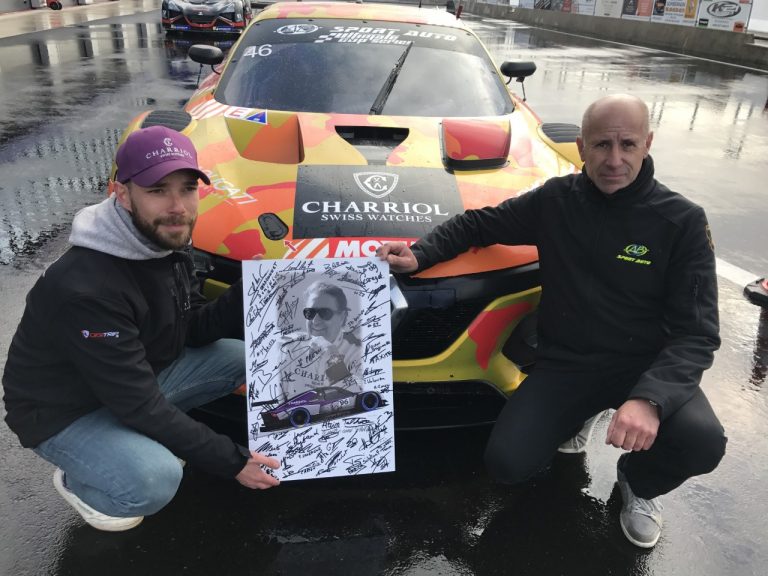 Before and just before the start and at the initiative of the men of Team AB Sport, a beautiful tribute had been paid to Philippe Charriol, who died during a private practice session he was attending on the track of the Circuit Varois du Paul Ricard on Wednesday 27 February. 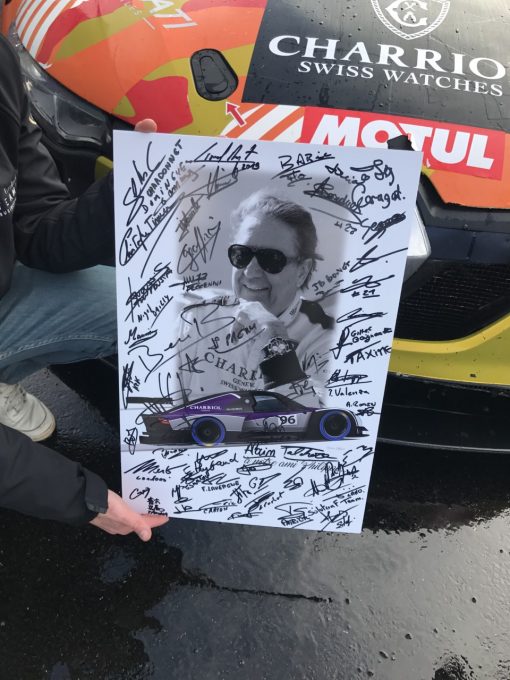 At the end of the 4 Hours of racing, and at the end of a sprint that saw him move up and reduce the gap second after second over the last few laps, Jean-Bernard Bouvet, the third relay driver of the Visiom team who had been succeeding Thierry Perrier, then Jean-Paul Pagny, regained precious seconds on the N°46 Renault RS01, driven by Tiziano Carugati, who had been in command since the end of the first hour, after the young and bright Greg Segers, had quickly positioned him in first place from the start. 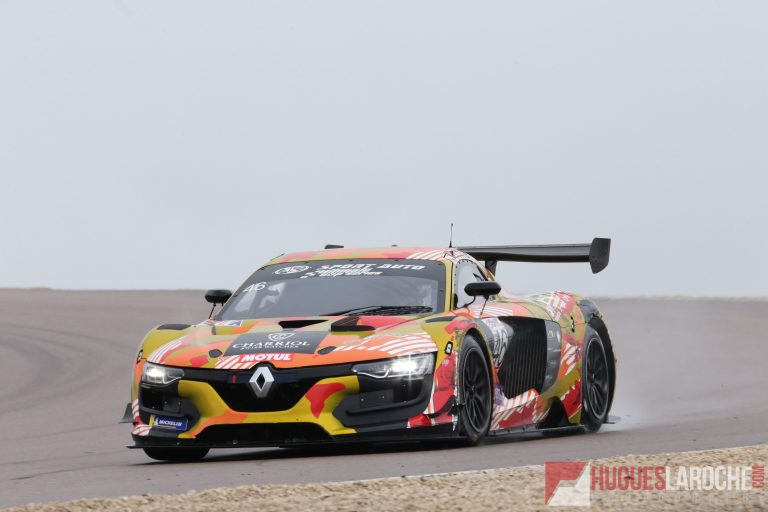 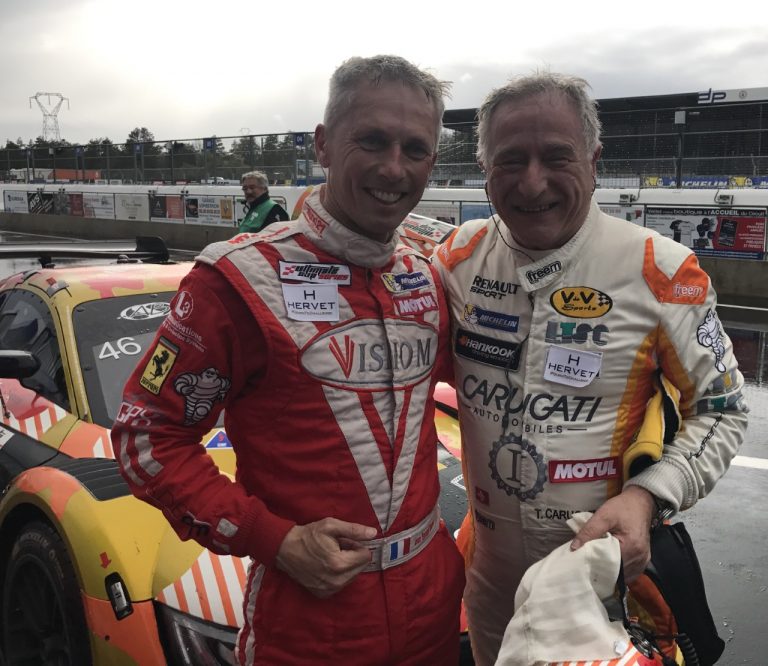 But Carugati the gentleman, could not fight against the very skilled, always so fast and experienced, JB Bouvet, and at the very end of the race, the Ferrari F488 Visiom, masterfully driven by the sarthois driver, caught up the leading car, then easily overtaken it, before increasing the gap, and took off for a well-deserved victory, the “Rosso” passing the checkered with 14.166 ahead on this Renault RS01 N°46 !

And it was another Renault RS01, the N°23 of the Team DEMJ of the tandem with Lucien Crapiz and Max Mugelli, the Estoril winners, who also scored many laps in 1st place, which completed the podium, ranked 1 lap behind.

The Top 5 being completed by a third Renault RS01, the second from the AB Sport team, the N°45 of Franck Thibaut and Domingues and by the Vortex of Bonnel, Lefebvre and Nobs. Then, we find the Foenix of Solution F of Rattle, Faure and Pourquié. Finally, the Alpine of the team Autosport GP of Mela, Lemaitre and Reviriault. 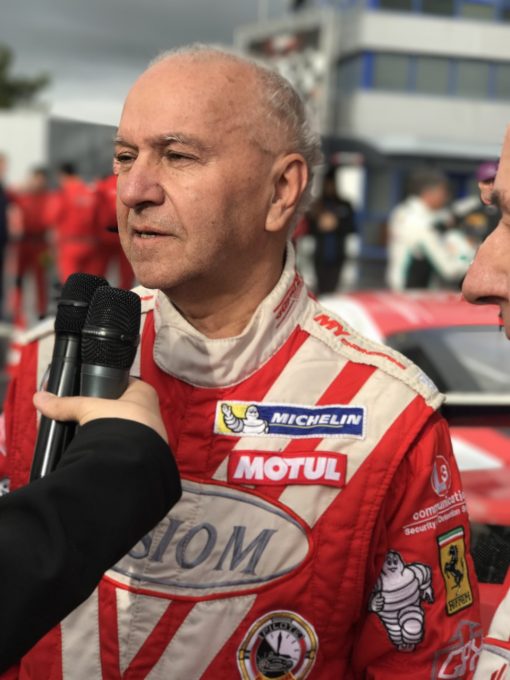 Thierry Perrier, one of the three winners, told us about this end of the race:

Everything was decided when we saw that the track was drying up at one hour before the finish. As a result, we waited for the window of the obligatory handicap stop to make it also match the maximum driving time of our driver with the licence Silver Bouvet – Perrier and Pagny being bronze – and with our change of tyres to put on slicks despite the track being still wet.

From the start, everyone was driving in rain tyres, the track due to the showers being soaked wet. We were the first to set up these slicks and this fact from the beginning of his relay, JB started to catch up with our delay by one and a half laps.

But at thirty minutes to the finish, everyone went through the pits to get some rain but it didn’t stop JB to continue to drive much faster than Carugati and with two laps remaining, he took over and regained the leadership to cross the chequered flag in the lead.

ULTIMATE-CUP-SERIES-AUTO-2019-DIJON-Jean-Bernard-BOUVET, happy winner of the GT race, with his team-mates, PAGNY and PERRIER at the wheel of the FERRARI-VISIOM – Photo: AutoNewxsInfo

The third and next round of the Ultimate Cup Auto Series Championship will take place at the end of May on the Slovakia Ring track close to Brno. With the presence of LMP3, GT and Formula Renault.

The CN and Mitjet will be on the Circuit du Val de Vienne in Le Vigeant the same weekend. 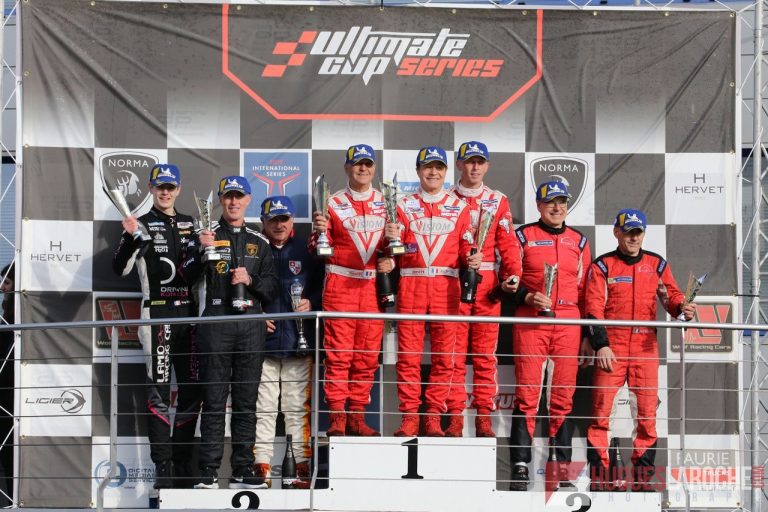 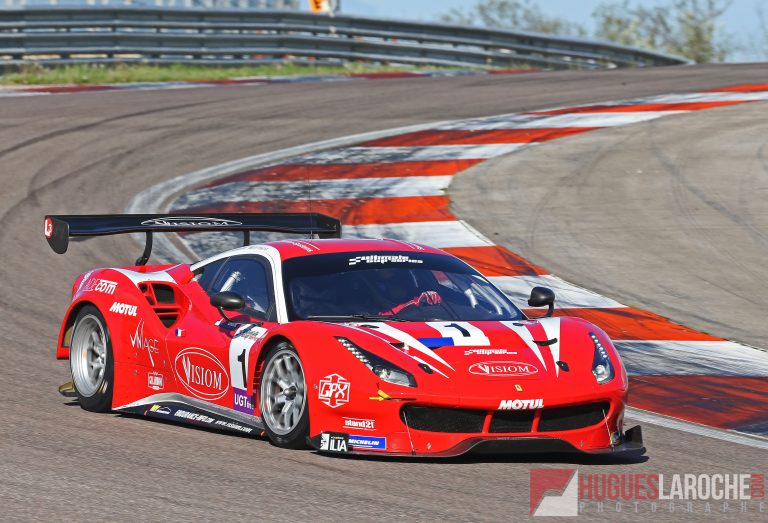 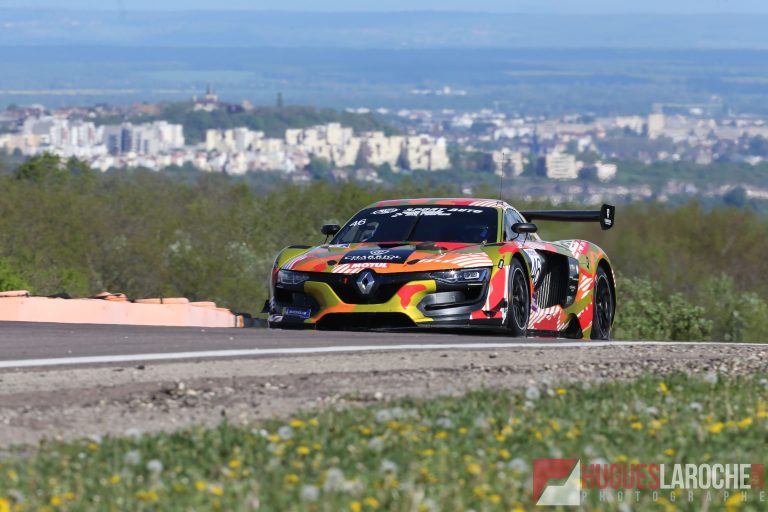 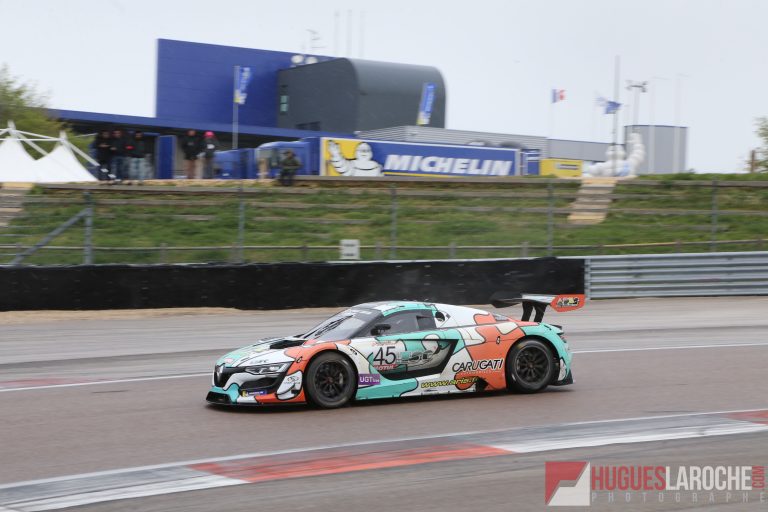 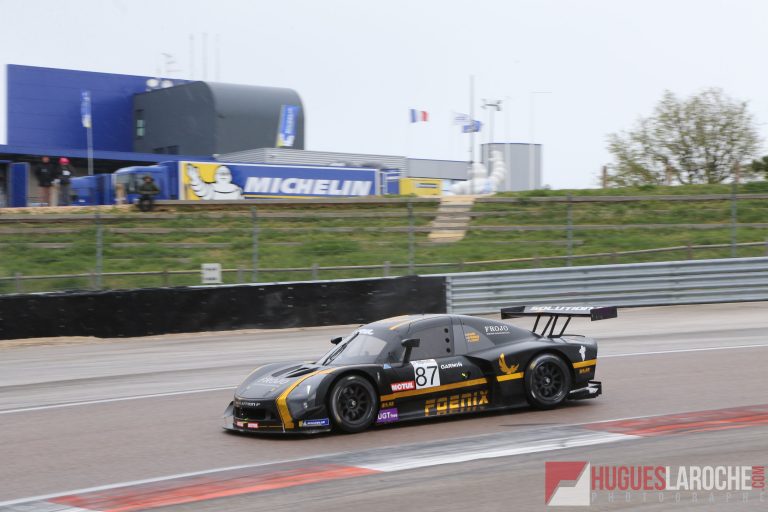 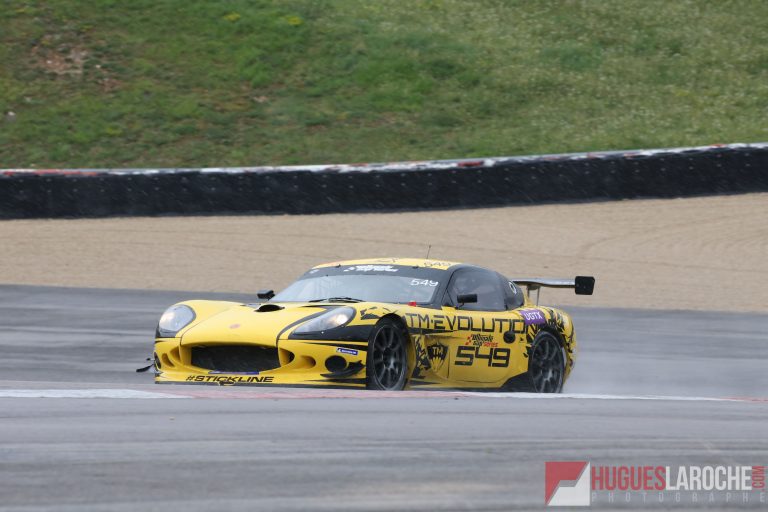 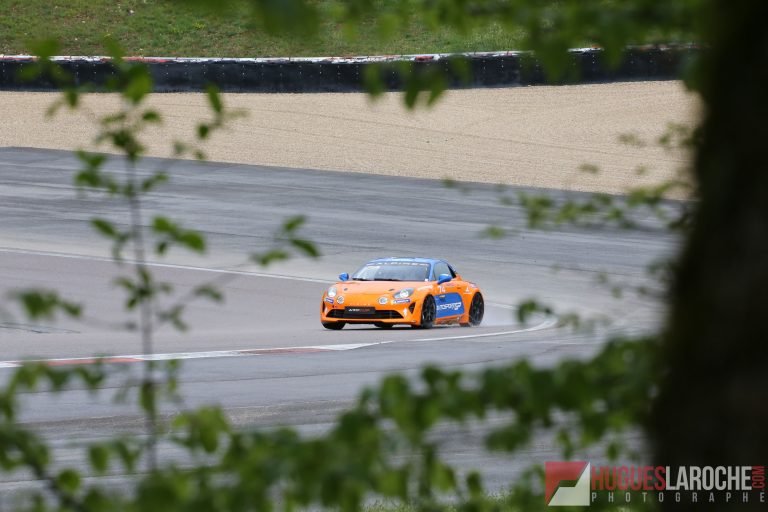