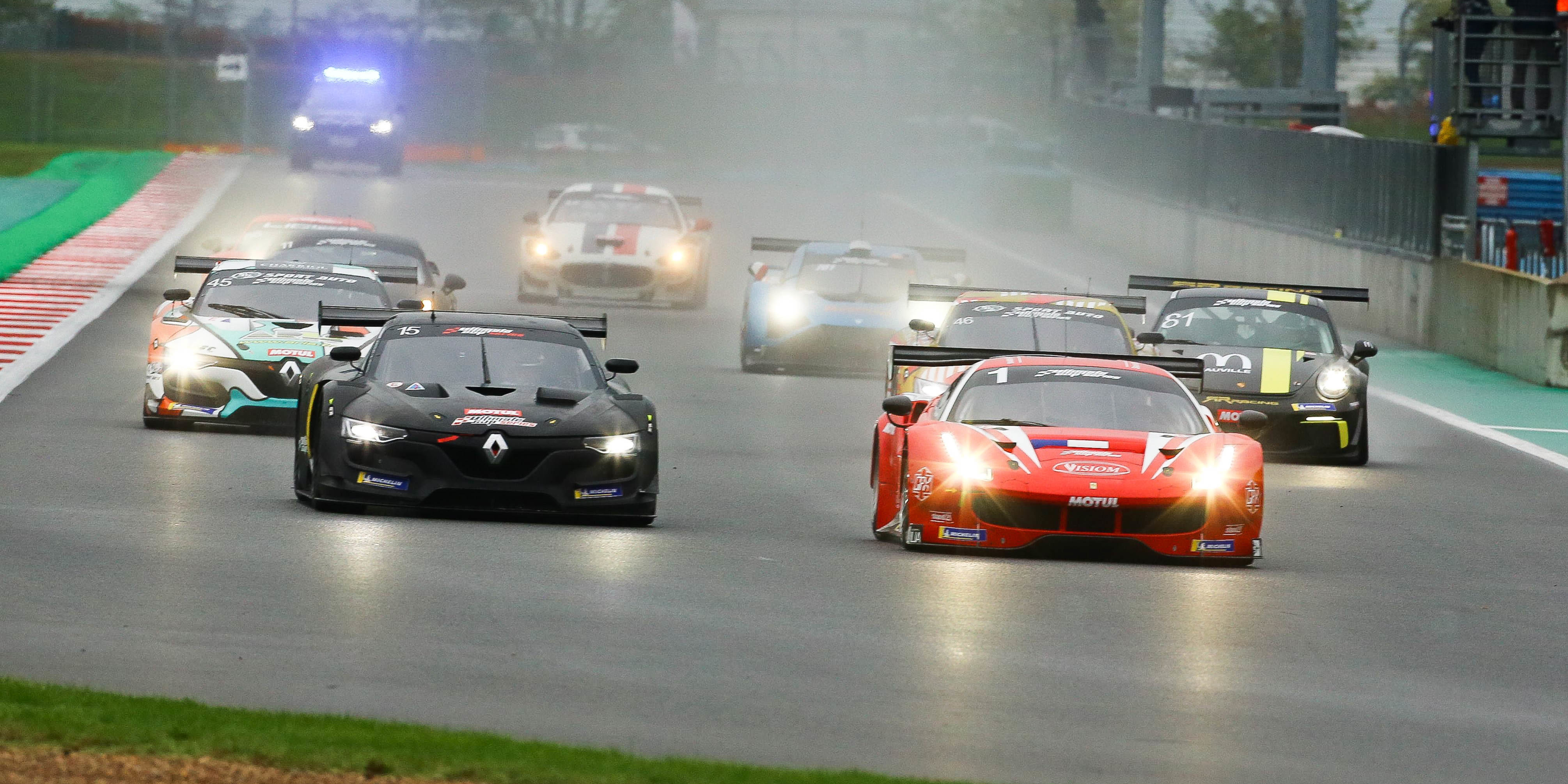 When we arrived on the circuit this Sunday morning, the sky was overcast but the rain was not yet there. At midday, the rain fell, became more intense every hour and disrupted the program of the day.

Race 2: Sacha Lehmann, the second best time in qualifying, started from pole position in the second race early in the morning at Magny-Cours. The LAMO Racing driver shares the front row with his teammate, Amaury Bonduel, the leader of the championship. The track is wet and all the drivers have put rain tires on.

The starting lights went out, Sacha Lehmann kept the lead while Amaury Bonduel was spinning in the third corner. Augustin Collinot (LAMO Racing) is now in second place. The Gentlemen Drivers category is lively as Maxime Lebreton (Formula Motorsport) overtakes Pietro Peccenini (TS Corse) in the first lap. In the lead, the first one made a mistake at the end of the last chicane and gave the Italian the leadership. Meanwhile, Amaury Bonduel made quick progress in the hierarchy and came back in the top 5 before the safety car intervened, 16 minutes before the finish. Basile Papadimitrou (Inter Europol Competition) stopped in the grass. 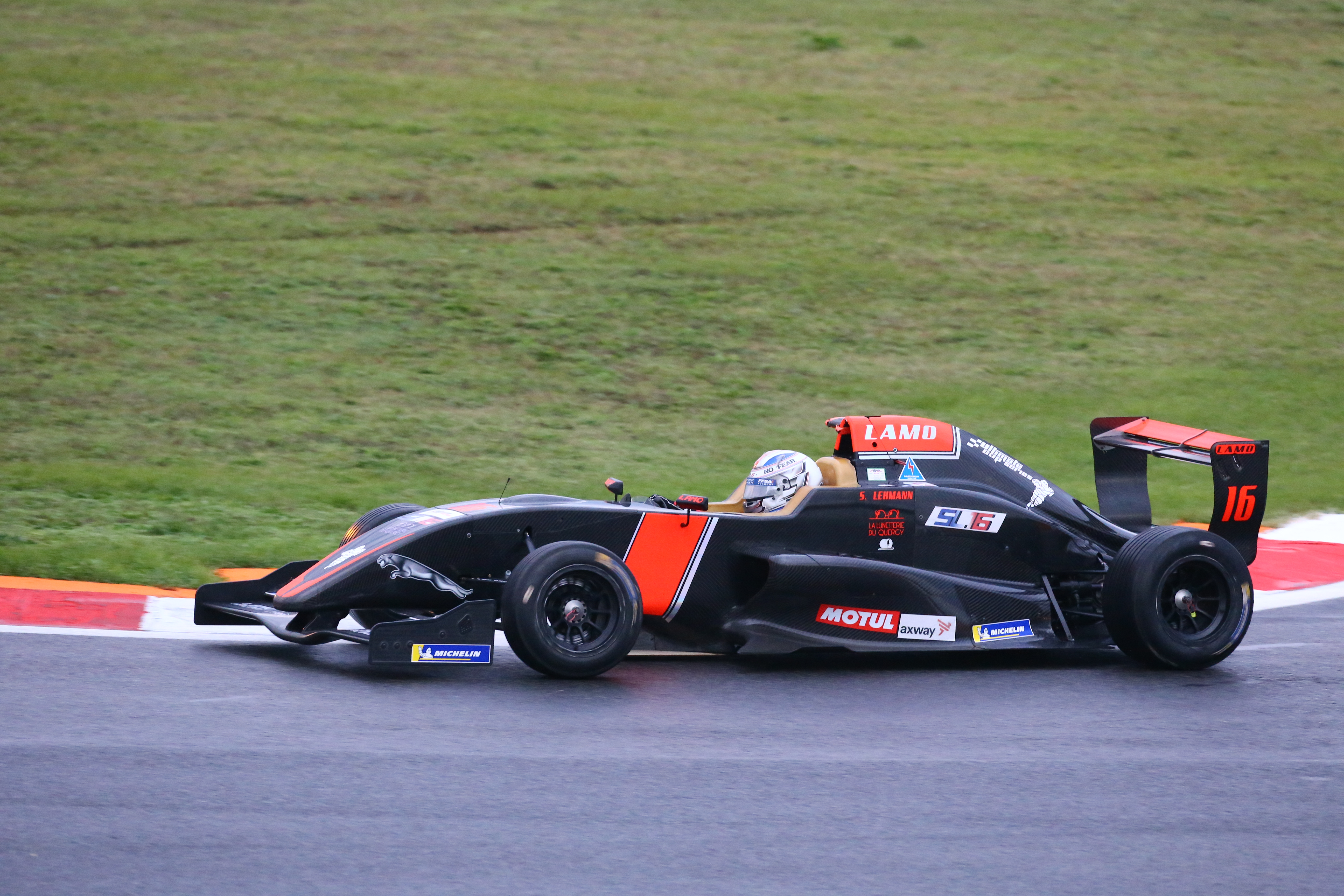 This neutralisation reduced the gaps to zero, whereas Sacha Lehmann had increased a significant gap by several seconds! Everything has to be redone for the Neuilléen. The restart is well managed and he is protecting himself from his pursuer, Augustin Collinot. The LAMO Racing driver won his fifth race this season. Despite a thundering final lap, Amaury Bonduel failed 5 tenths behind Augustin Collinot, second in this race.

Race 3: Depending on the results of the first two races, Amaury Bonduel is once again in pole position in the final race of the single-seater Challenge. The leader of the championship saw Augustin Collinot overtake him in the first corner but the Belgian driver did not give up, came out of the Adelaide corner better and took his revenge on a soaked track. 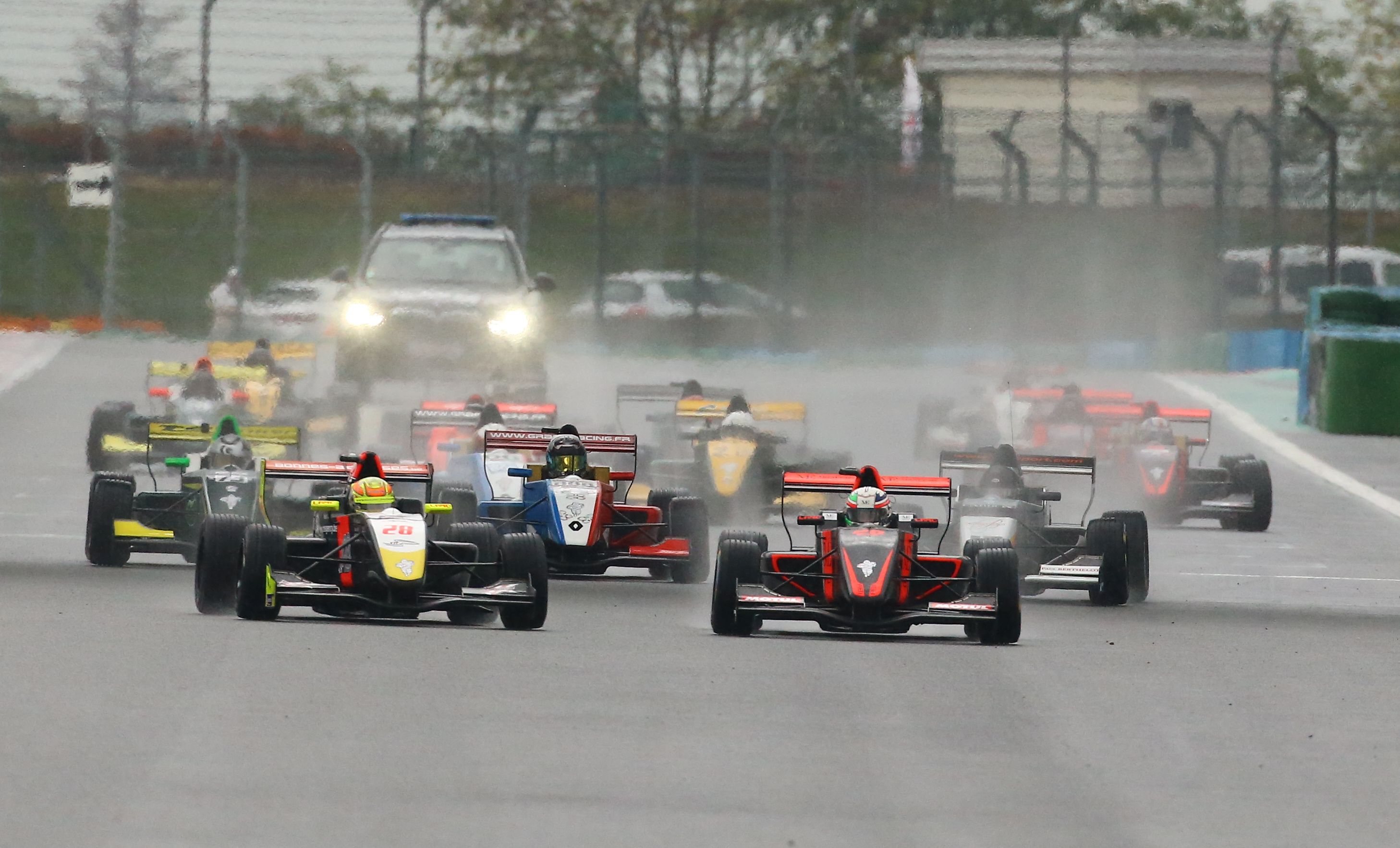 Two cars failed to start and were locked on the starting grid, among them Sacha Lehmann. In order to clear the way, the safety car intervened and unexpectedly, Amaury Bonduel, the leader, as spinning behind the safety car and fell to the third rank! 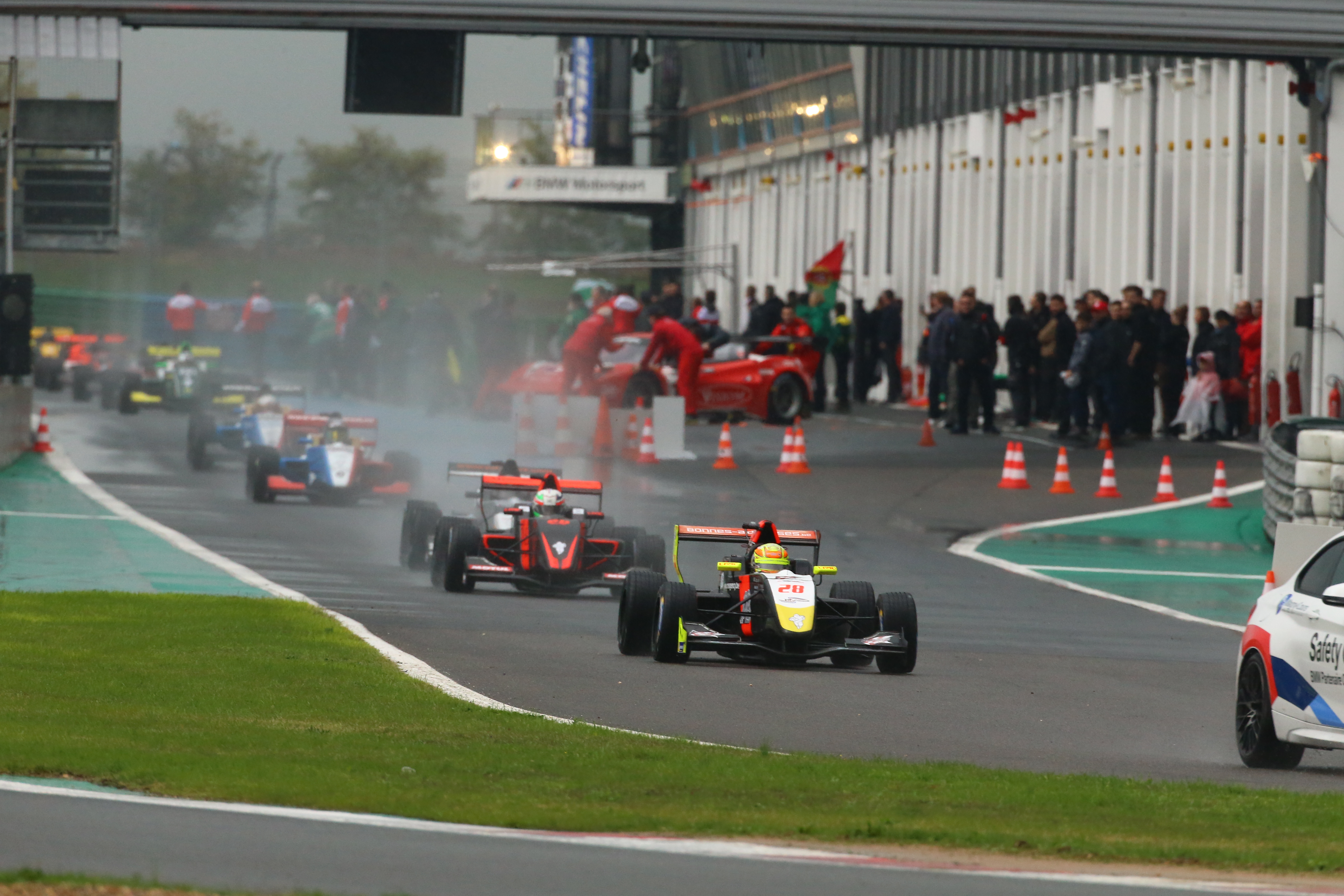 With 20 minutes to go, the flag is raised. Augustin Collinot succeeded in his relaunch and trapped Baptiste Berthelot (CD Sport), then second. He is overtaken by Amaury Bonduel but has not said his last word. The Belgian is the subject of a mechanical problem and stops on the edge of the track in sector 2, just like Howard Sklar (TS Corse), at the Chateau d’eau. New intervention of the safety car, followed by a restart 10 minutes before the presentation of the chequered flag. No problem for Augustin Collinot, who keeps the advantage, while Baptiste Berthelot is threatened by Franck Gauvin (Graff). However, it is a real deluge which falls on the circuit and the red flag is raised with 6 minutes to go. 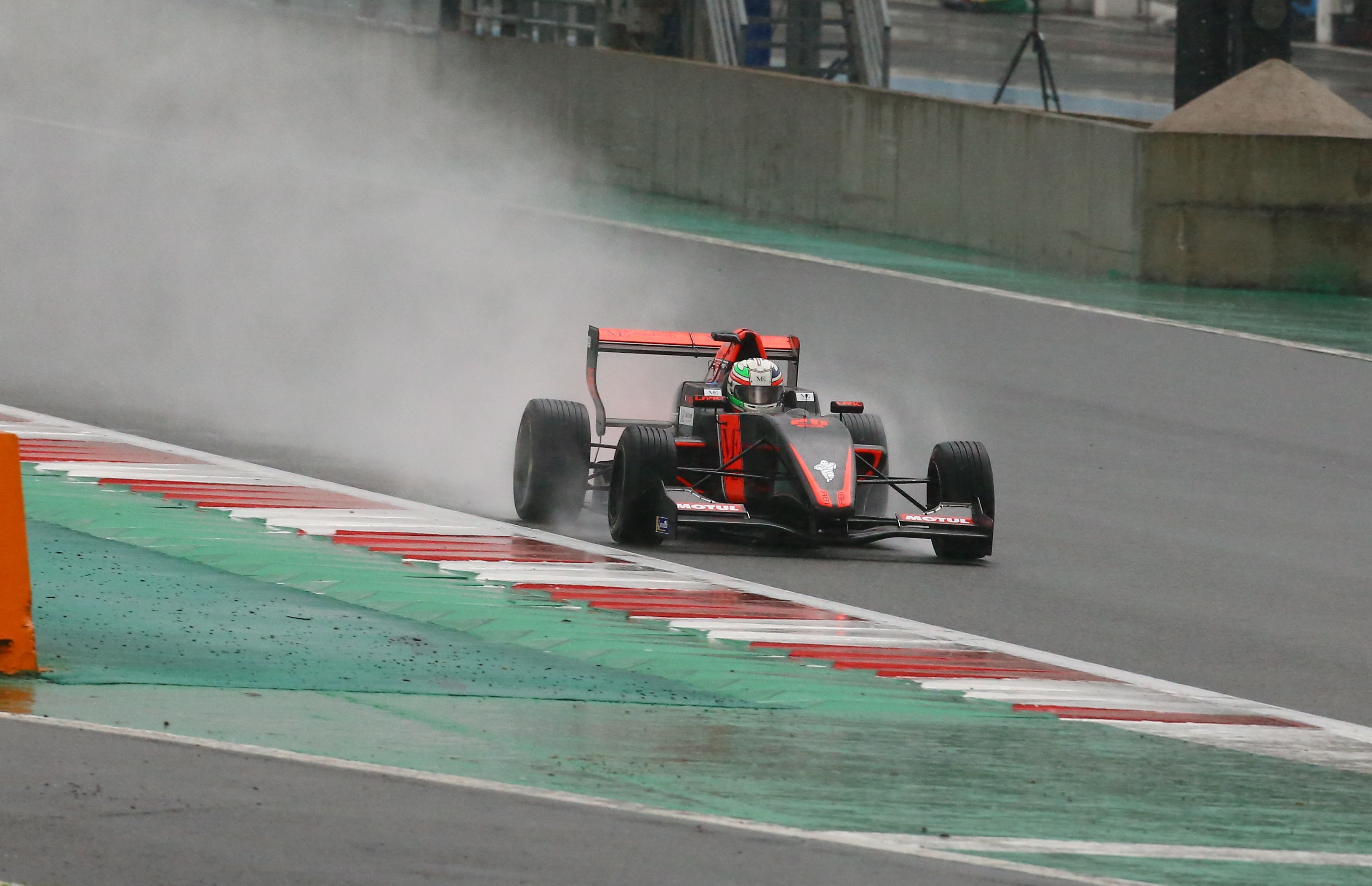 As provided for in the regulations, the ranking is based on the results of the previous round. It is in these very special conditions that Augustin Collinot wins his very first race of the season! Baptiste Berthelot finished second while Franck Gauvin not only finished third overall, but also won the Gentlemen Drivers category.

GT: The weather is not good this morning, for this four-hour race. The poleman, Thierry Perrier, at the wheel of the Ferrari 488 GT3 n°1/Visiom, was cautious at the start, and placed himself inside, but Claude Degremont, on the Renault R.S. 01 n°15/Krafft Racing, infiltrated outside to take the first place. Meanwhile, the Porsche 911 GT3 Cup n°81, racing in the UGTC category, is in third place, taking the lead over the Renault n°46/AB Sport Auto. 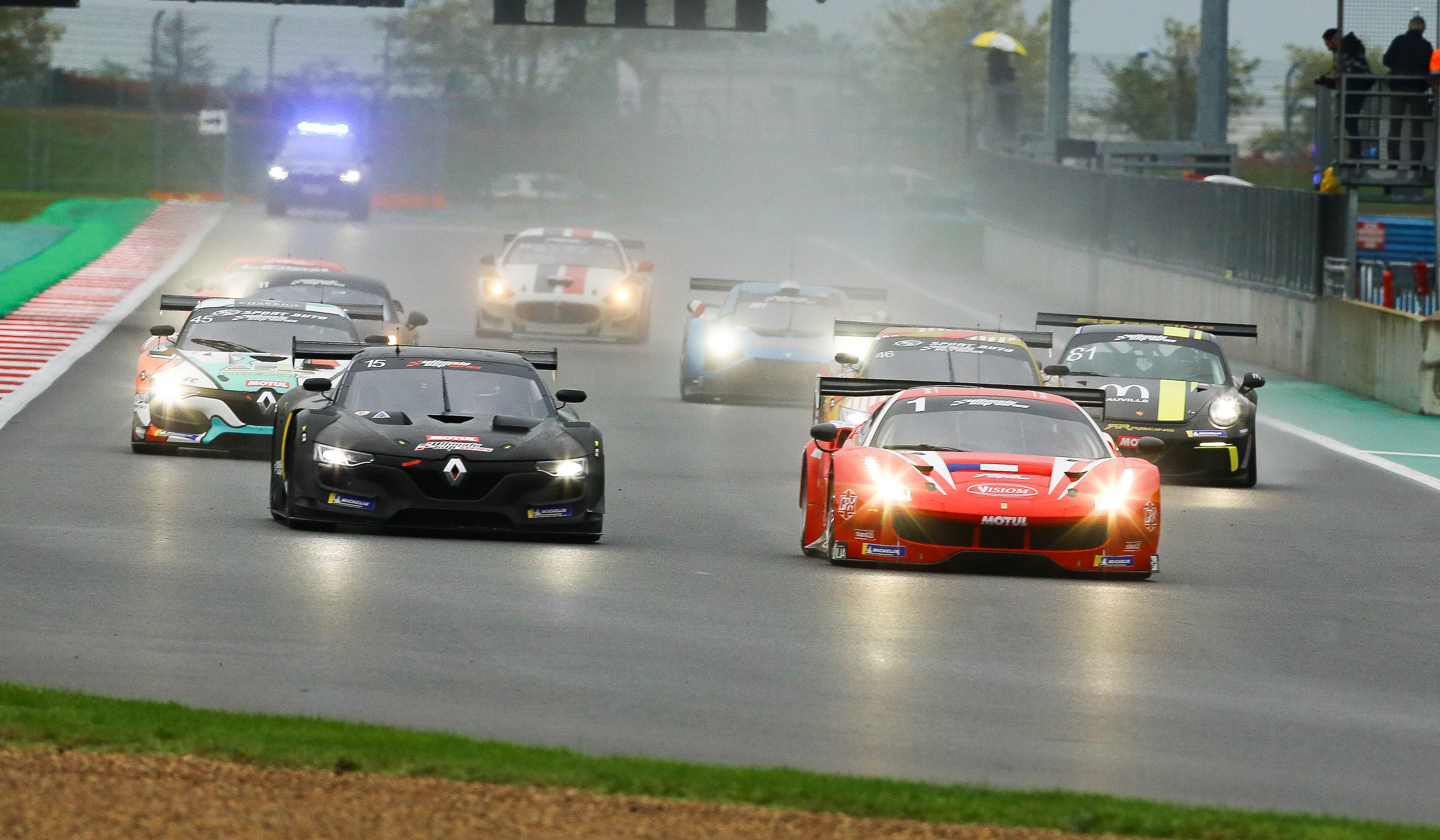 The two leading men are racing as the battle rages behind them, between the two AB Sport Auto cars. Claude Degremont increased his lead over Thierry Perrier and the gap between Renault n°15 and Ferrari n°1 was nearly 40 seconds after the first hour.

The rain falls in the second hour and after the first wave of pit stops, taking into account the balancing penalties of the crews, Renault n°15 confirms its leadership ahead of Ferrari n°1. Milan Petelet and Jean-Paul Pagny respectively take the wheel.

The race is neutralised by a Full Course Yellow for the first time following the exit of the Ligier JS2 R n°56 from the track, in the gravel of turn 2. Renault n°46 took the opportunity to stop, Greg Segers took the wheel and came out third, behind Ferrari n°1. The French driver has the second place in sight and whips to catch up.  After several fast laps, he caught up with Jean-Pagny and overtook him for second place. Renault n°15 continues to lead the race thanks to an exceptional Milan Petelet! 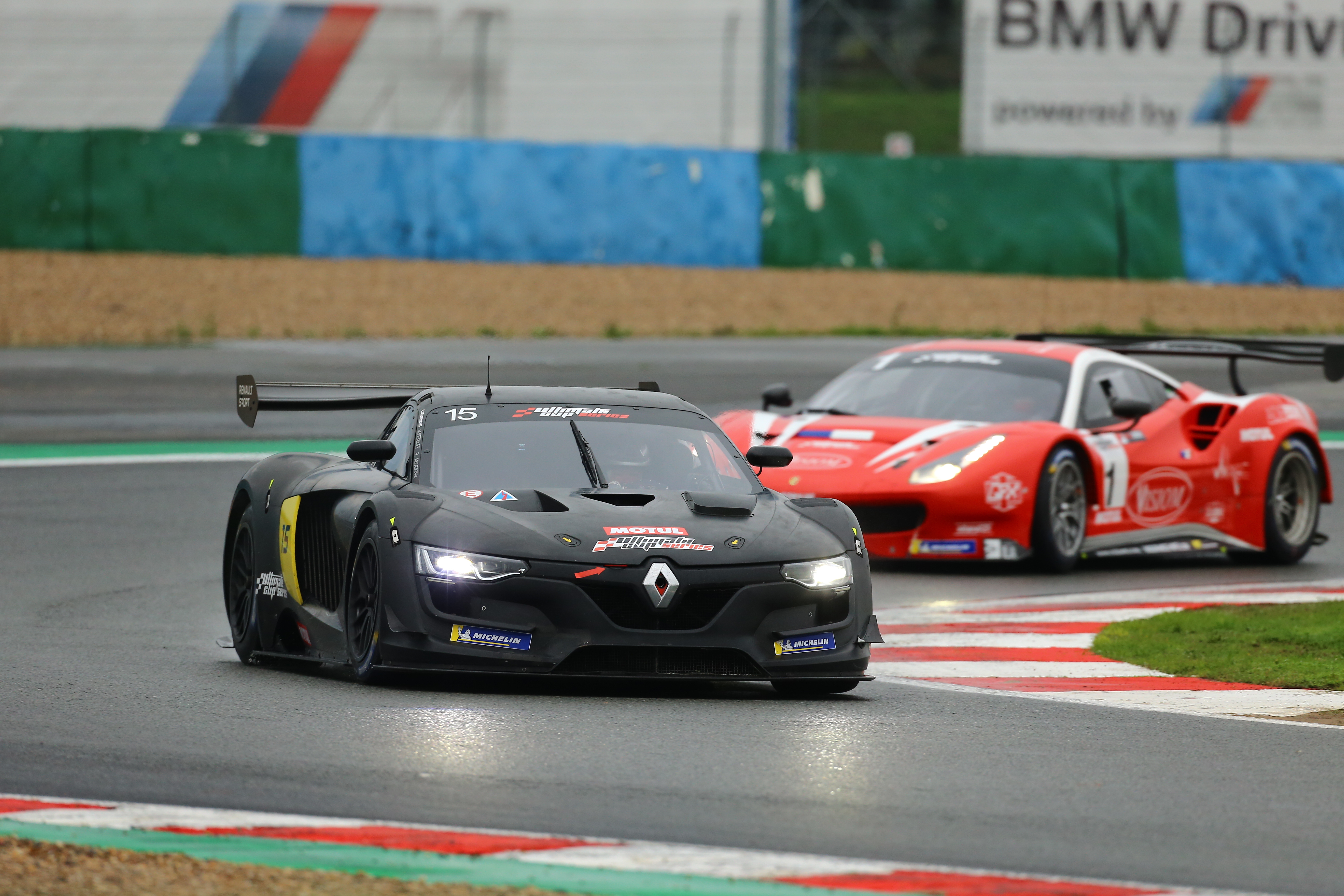 A second FCY was deployed in the third hour, due to a new off-roading. While we expect the N°1 Ferrari to rush into the pit lane to perhaps make a master stroke, Jean-Paul Pagny makes an extra lap before stopping. One lap later, the rain intensified and the leaders rushed back into the stands. Renault n°15, not yet stopped, keeps the advantage, ahead of Renault n°46 and Ferrari n°1. At the wheel of the car, Jean-Bernard Bouvet has just taken over and overtakes n°46 for second place. The latter spins and causes a third FCY. All it required was for the Krafft to take the opportunity to stop the n°15 and make a real stroke of genius!

Indeed, Claude Degremont got back into Renault n°15 and entered the second hour of the race two laps ahead of Ferrari n°1, still driven by Jean-Bernard Bouvet. This last one performs a series of good laps, reduces the gap and tries to split himself to be in the same lap as the leader. In vain, since under heavy rain, Claude Degremont crossed the finish line a little more than a lap ahead of Jean-Bernard Bouvet. 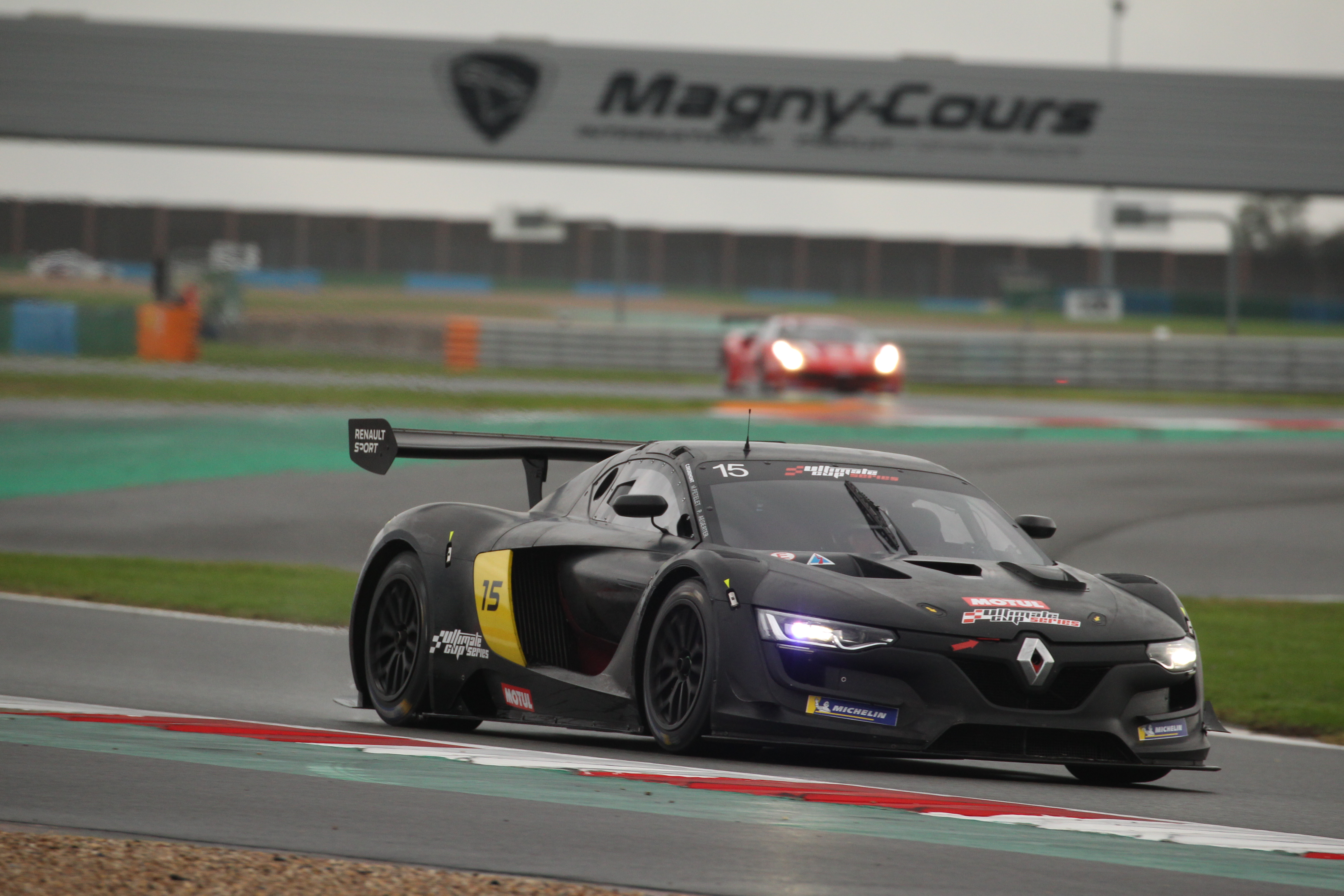 The crew of the Renault R.S. 01 n°15 Krafft wins after having driven 95 of the 110 covered laps. Thierry Perrier, Jean-Paul Pagny and Jean-Bernard Bouvet failed to win the Ferrari 488 GT3 n°1/Visiom but won the GT title in the Ultimate Cup Series! The podium is completed by the Renault R.S. 01 n°45/AB Sport Auto, driven by Franck Thybaud, Sébastien Chardonnet and William Teneketzian.

Jean-Philippe Jouvent and Olivier Metz have shown great consistency, enabling them to finish fifth overall and win the UGTX category in the N°11/Krafft Racing Porsche Cayman. 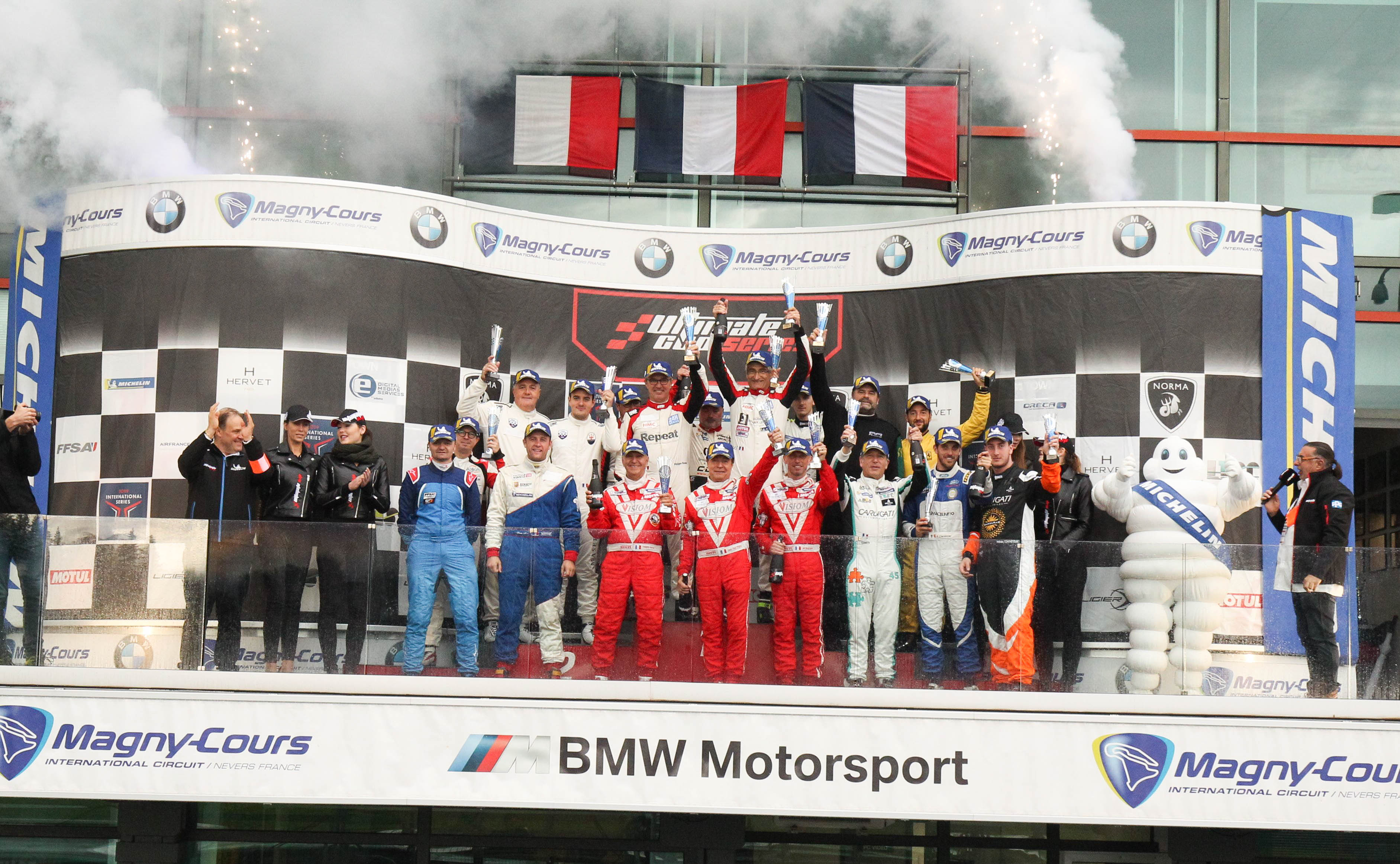 The high pace of the Ligier JS2 R n°56/AB Sport Auto, entrusted to Jorge Domingues and Julien de Miguel at the beginning of the race, was not rewarded. This crew had some damage and did not see the finish line. The victory in the UGTC category went to the Porsche 911 n°81/Tinseau Assistance of Regies Rego de Sebes and Johan-Boris Scheier, in front of the Maserati n°14/Racetivity, by Jean-Philippe Belloc, Lucas and Frank Robbez, and therefore the Ligier n°56.

The race of the Vortex V8 n°701/VORTEX was not easy but Nicolas Nobs, Frank Lefevre and Philippe Bonnel managed to reach the finish line.

CN: the last Sunday race is dedicated to the prototypes of the CN Challenge. Rainstorms fall on the Nevers Magny-Cours circuit and the race management decides, in the first instance, to delay the grid setting procedure. After several weather points, the team managers are invited to attend the safety car tour and listen to the impressions of their driver. After more than an hour of floating, the decision falls, the weather does not evolve positively and the race is simply cancelled.

The Ultimate Cup Series will meet again in two weeks, on the Circuit Paul Ricard, for the final of the inaugural season!