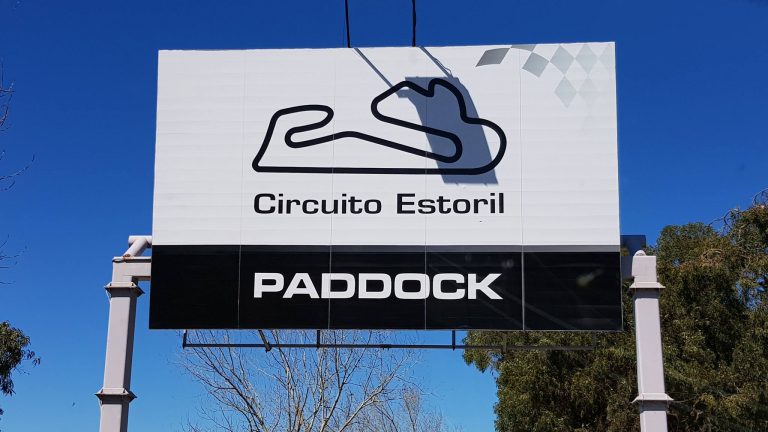 It was at the launch of the brand new Ultimate Cup Series Auto that the competitors of the 2019 Legends Car Cup battled it out on the portuguese track, Estoril. This particular circuit, with great height changes and a 985m straight is a real test for the new generation of this Legends Cars series. Indeed, this season the Legend Car is making a historical change by running the new FZ 09 engine. And so they went out on track Friday morning for free practice, under a clear blue sky. 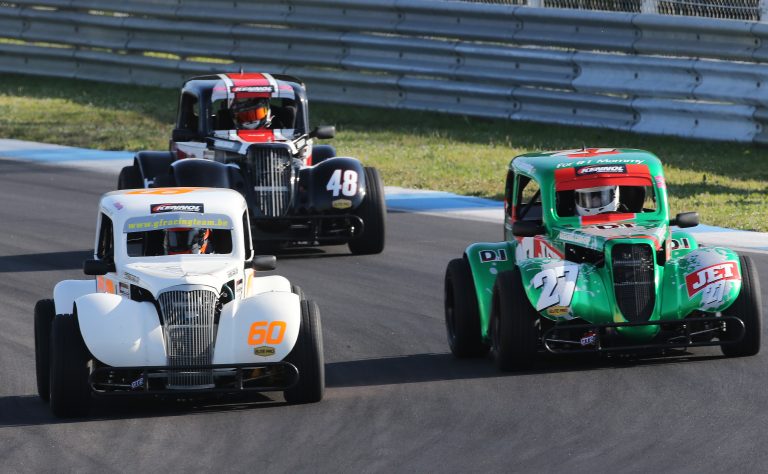 The belgian driver Maxime Lieutenant was fastest at first with a 2’05.930 lap time, followed by the 2017 champion and 2018 vice-champion Frédéric Morel and Bastien Morisse. In the second session, the times were different as Morel picked up the pace, and laped at 2’03.732, dethroning his Belgian adversary, who was followed by Thibault Chiron.

Despite the efforts the organisers made to even out the performances of the two generations of engines, by weighing down the newer ones and by lowering the minimum weight of the older generations, the cars fitted with the FZ 09 were clearly faster down the straight. 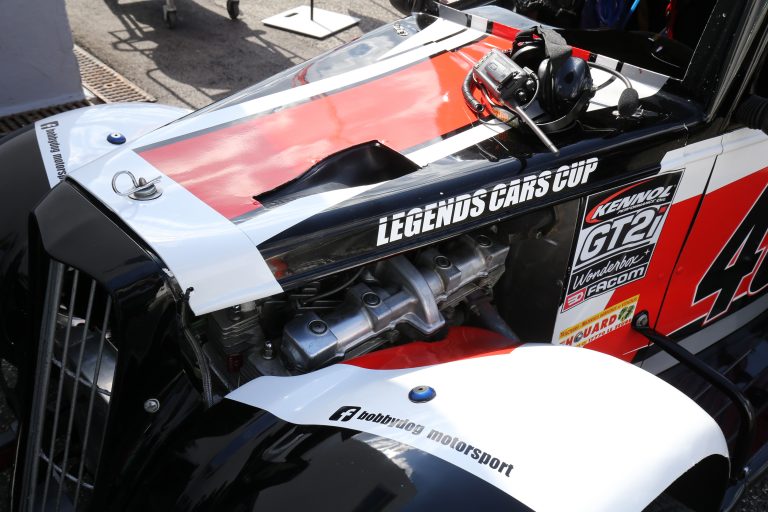 After being the fifth fastest during Free Practice, Maxime Sonntag got the best out of his new car by setting a 2’03.219 lap, beating Morel and Timothée Ghislain.

But Frédéric Morel stepped up in the second session, by setting the fastest time with a 2’02.843 lap, pushing Lieutenant back to second place with a 2’03.813. Thibault Chiron was third fastest and got pole position for the 1300 Xjr’s. 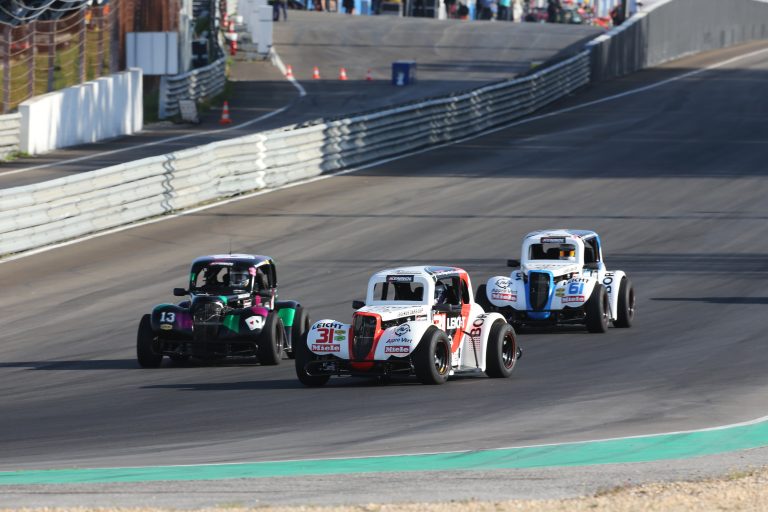 On Saturday morning, it was finally time for the first LCC race!

After a fast start, Ghislain overtook Sonntag, who in turn after starting on pole found himself in 4th position. Then, after a brief yellow flag, the battles started again offering a brilliant race, on one hand Morel and Ghislain were fighting over 1st position, and on the other Chiron and Sonntag for 5th. Lieutenant, in 4th made the most of the situation and went on to secure third place.

At the center of the pack, things were just as exciting between Claude Watteyne, Bastien Morisse, Laurent Imbert and Sebastien Grippon, without forgetting the new comer Olivier Desfours who unfortunately lost out on a 1st place due a technical issue… 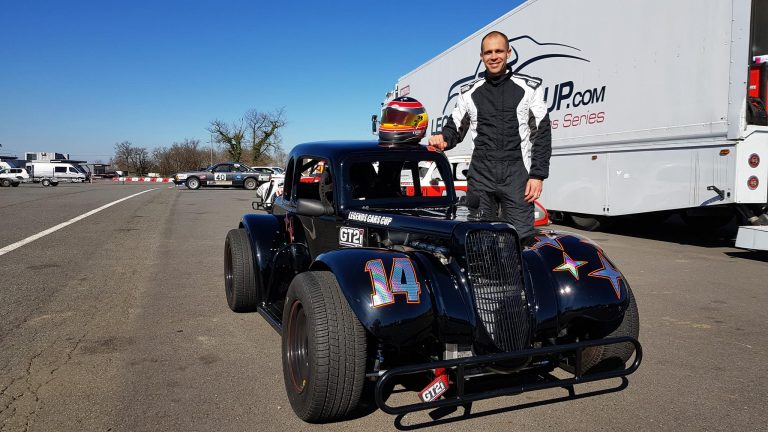 Finally, it was Ghislain who won the first race, followed by Morel by …0.026 seconds! He hopes that “ the entire season will be as passionate, animated and fun”

In the Elite class, Laurent Lebouc, Eric Sonntag and Belgian driver Gregory Rossellini were on the podium. 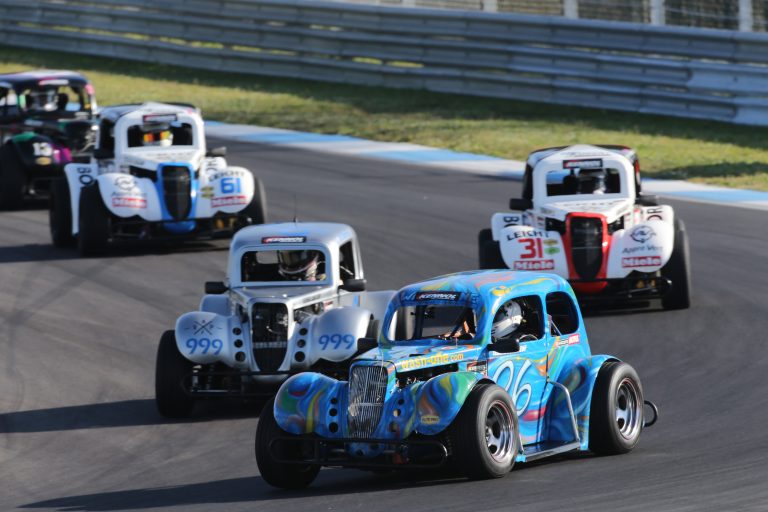 Sunday started particularly well for Morel. Being on pole, he got the fastest time with 2’02.241 and dominated from start to finish the second sprint race with the whole back straight between him and the others:

“ I was in front, the car was perfect, it was great. I managed to do tests, to get my trajectories right and to prepare myself for the endurance race… That will be harder this afternoon, there are some serious competitors!”

Behind him, was a fantastic race. Sonntag started at the back of the grid, made a superb comeback and joined Lieutenant and Chiron. The three drivers battled it out for second place.

In the end it was the belgian driver who got the final say, with 0.046 seconds in front of Sonntag:

“ I got third place but it was a crazy race! Really fun” 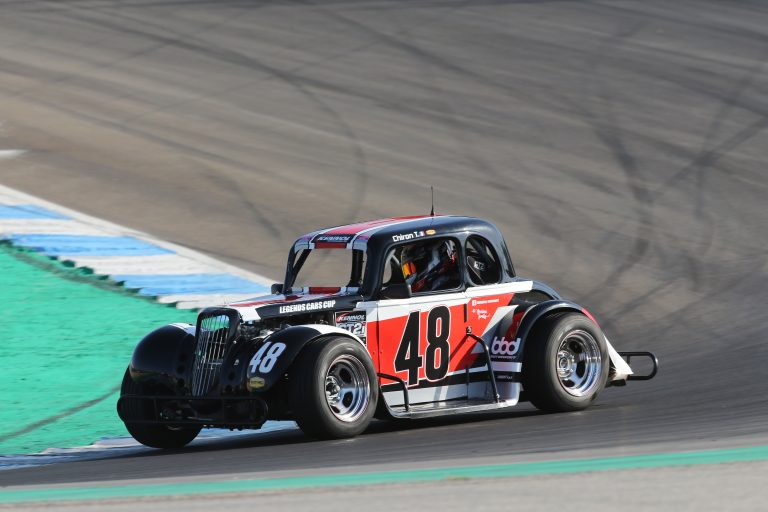 Chiron failed to get a spot on the podium with 0.035 seconds behind his rival, and couldn’t wait for the Endurance race:

“ I am disappointed, but happy to have battled it out at the top”

In the Elite class, Frédéric Depresle stood on the first step of the podium, securing a solid 5th place overall. He regrets being inconsistent by is still happy with the podium:

“ It’s the start to the season, but I’m happy with the result, I will do better in the endurance race” he promises.

Patrick Metaut, stood on the second step. Happy with his performance, he thanked his team:

“ It’s a great circuit, the atmosphere is always nice. It was a good race. The mechanics worked well. They work behind the scenes but we mustn’t forget them”

Laurent Lebouc, after battling it out with Grégory Rossel, was the third man on the podium:

“ If it continues, I’ll get used to it… I am ready for the Endurance Race!”

All this was building up for a great race. 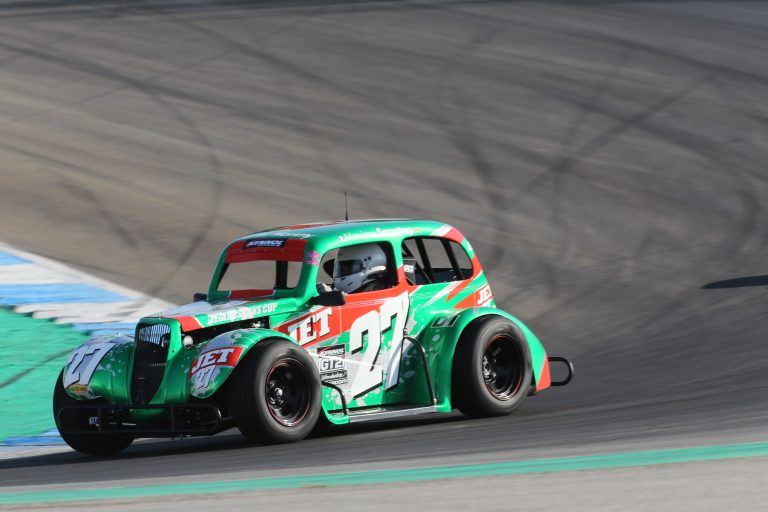 It was early Sunday afternoon when the drivers went back on to the track for the Endurance race. And it started off greatly as a group of four cars separated from the pack and led the way, with Ghislain in the lead, followed by Morel, Sonntag and Lieutenant, all at the wheel of the new FZ 09.

Behind, was a group of 1300Xjr’s of which Chiron was leading in front of Sébastien Grippon, Florian Baloche, Bastien Morisse and Laurent Imbert.

At two minutes from the window where a mandatory stop in the pits was to be made, a safety car was sent out, which had an effect on most strategies, forcing the majority to pit right away.

At the restart, the leading pack was led by Depresle, and at which point Ghislain attacked to regain his position.

Most of the time, the corners were taken by three cars at a time, all the gaps being well exploited, as Maxime Lieutenant explained after the race.

And, on the last corner, before the checkered flag, Sonntag was too greedy and unfortunately spun off and hit the side, leaving his three competitors to step on the podium.

Lieutenant won the race, followed by Morel and Ghislain-Despresle

In the Elite category, Desfours got the win in the first race of his life, in front of Lebouc and Métaut.

The next meeting for the Legends Cars Cup is at Ledenon, for the second round, on the 12th-13th-14th April 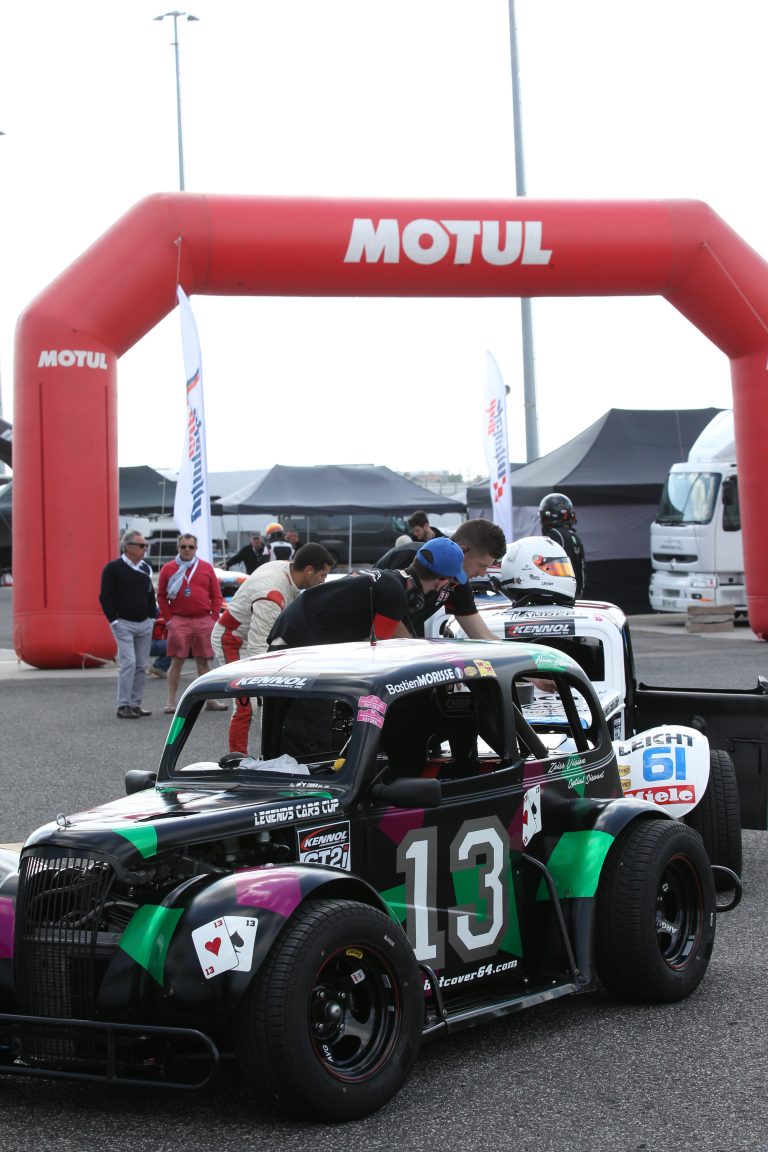 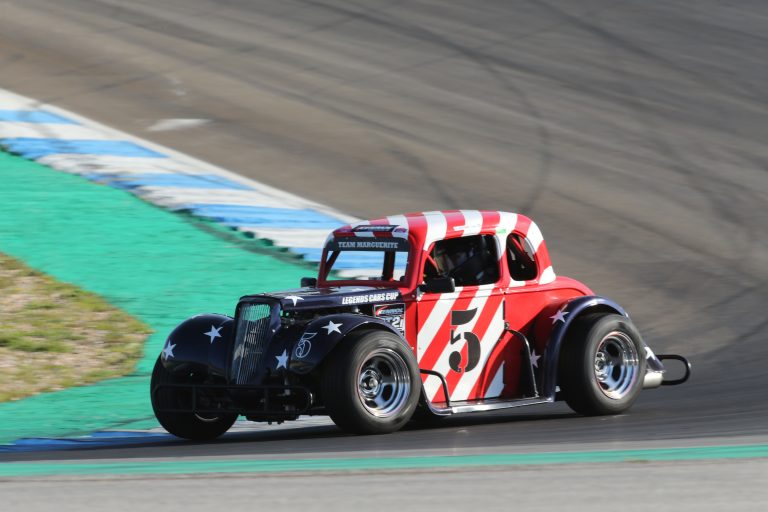 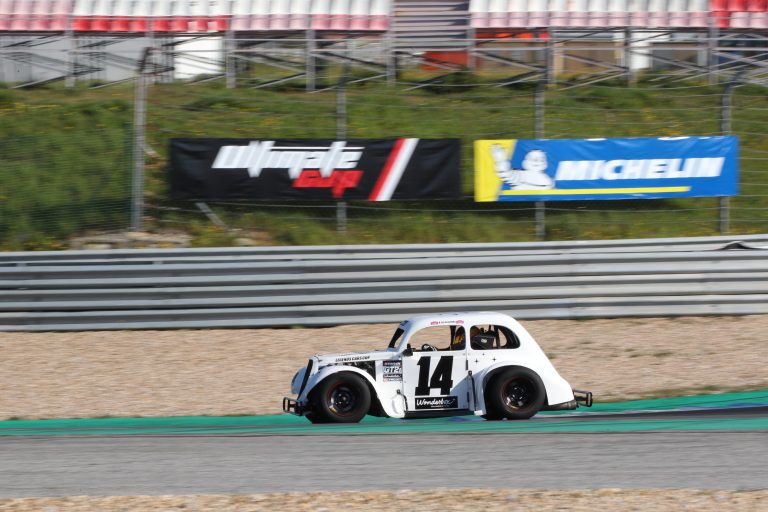 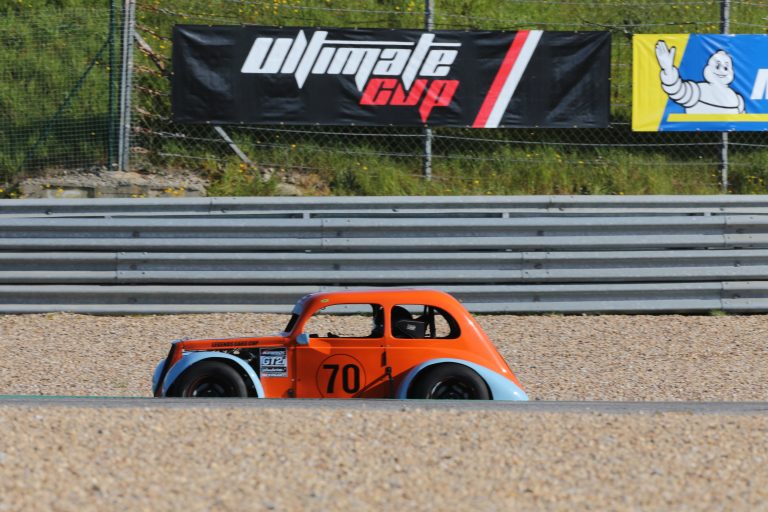 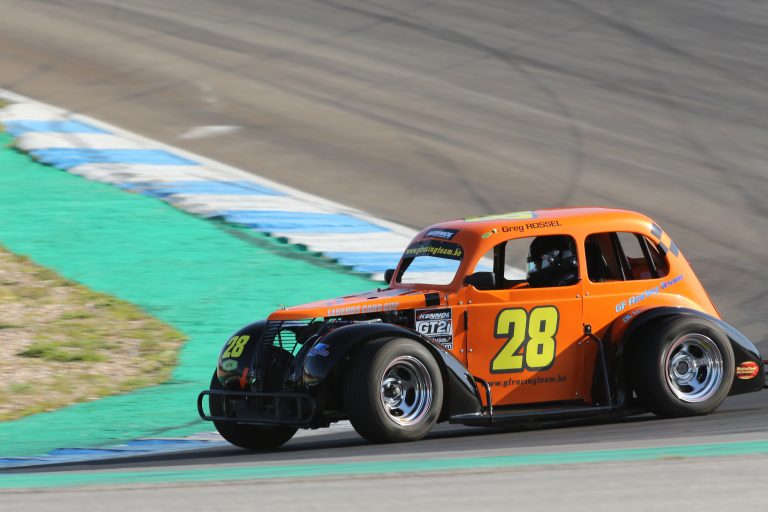